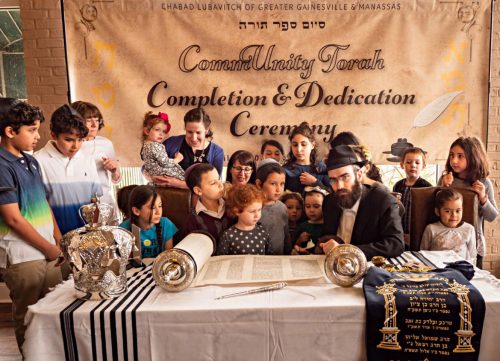 Handwriting a Sefer Torah requires time and attention to detail.

Scribes typically spend more than a year working on the scroll, and they must make sure to correctly write the more than 304,000 characters it contains.

Community members celebrated the completion of a new Torah and participated in a dedication ceremony in Gainesville.

The Chabad of Greater Gainesville & Manassas hosted the event on Sunday.

Attendees were able to fill in a letter for the Torah.

Music, dancing and a parade were also offered, according to a release. After the parade, the Torah was placed in the Ark.

“It was an unbelievable event, really seeing the community come together,” Rabbi Shmuly Perlstein told What’s Up Prince William. “The Torah is the bedrock of the Jewish community and it’s our first Torah that we’re actually going to have here … Honestly, I don’t have words to explain how special the event was.”