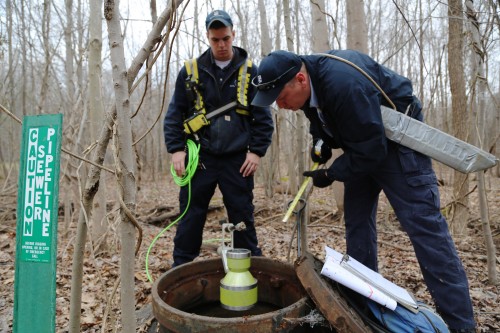 You probably see plenty of manholes during your commute, or when you’re out running errands. Did have you ever thought about the workers that use them?

According to the Prince William Service Authority, there are more than 31,000 manholes in the county, and not all of them are easy to get to. Now, with the little help of a map, a machete, and some new pole camera technology, Service Authority workers can find and access manholes easily – even if they’re out of the way, according to a release.

More on the new technology, from a release:

Because of their size and weight, traditional video camera inspections of sewer lines isn’t always practical depending on the location of many manholes, many of which are situated in densely-wooded areas. So in 2013, the Service Authority purchased a collapsible 25-foot pole camera with a high intensity light and zoom lens. This pole-mounted camera could be stuck inside the entrance of a sewer line for an initial inspection.

While one employee inspects the pipe with the camera, his or her partner can assess the condition of the manholes and has the equipment on hand to maintain the easement if it is overgrown. Hogan said depending on the manhole location, he and his crew can inspect up to 20 manholes in a day.

Video van crews can come back later to more thoroughly inspect the lines or take corrective action such as lining the inside of sewer mains with Cured-In-Place-Pipe to protect them from damage caused by tree root intrusion or other destructive elements. With the new, easier-to-use technology, crews can inspect double the amount of sewer lines in a year than the traditional van-installed camera, said Service Authority Operations & Maintenance Director Don Pannell.

“Having something portable to get a quick look in a pass-fail type of assessment of the pipe is really valuable,” Pannell said.

The pole camera inspection program was the result of new, more stringent rules regarding sewer discharges into state-owned bodies of water. Called the 100-foot buffer rule, the Service Authority decided to be more proactive in its inspections of sewer pipe close to the shorelines of the various streams and rivers that run through Prince William County.

The Service Authority’s GIS Department also plays a large role in the program by creating a detailed map of each sewer shed in the County. Each section displays all the manhole covers that are in close proximity to a body of water, and then a work order is generated for crews to inspect those areas. Should an inspector find anything unanticipated, he or she can document it so that the GIS Department can update it back in the office.

This new system of preventive maintenance has already reaped dividends for the Service Authority. In the fall of 2013, a crew discovered a manhole filled with rocks and tree debris – an obstruction that  Infiltration & Inflow Manager Rob Wilson said would have certainly caused a sewage backup had it not been discovered by the crew assigned to that area.