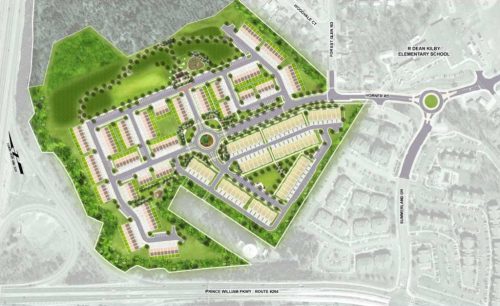 New residential development may be coming to Woodbridge

Update: The public hearing is taking place during a Board of County Supervisors (BOCS) meeting on November 20.

The construction of hundreds of new homes could impact daily life in Prince William County.

County officials have received a proposal for a residential development in Woodbridge.

Community members can give their perspective about the request to the Board of County Supervisors (BOCS) at a public hearing on October 16.

The hearing will begin at 7:30 p.m. at the McCoart Administration Building in Woodbridge, according to email from Supervisor Frank Principi’s office.

If approved, 325 townhouses and living spaces would be constructed on Horner Road, which is located near the Prince William Parkway and I-95.

The proposed development, which would sit on 55 acres, is expected to bring more than 150 students to Prince William County.

It could also increase traffic congestion and the number of emergencies the Occoquan-Woodbridge-Lorton Volunteer Fire Department (OWL VFD) would respond to, according to the email.

Citizens interested in speaking at the public hearing should arrive early and sign up at the board chambers.

Individuals who are unable to attend the meeting can email the BOCS at BOCS@pwcgov.org.