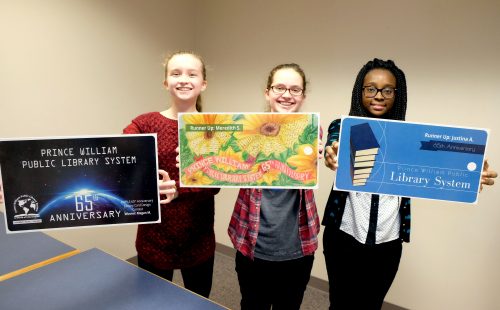 If you haven’t picked up your new Prince William County Public Library card yet, then maybe you should!

To celebrate the library system’s 65th anniversary, three Prince William high school students designed the new cards as part of a contest, according to a release.

More on the contest and winners, from a release:

Library Communications Manager Andrew Spence said there were entries from most of the area’s high schools. “The competition allowed high school students’ artwork to be submitted from all over the Prince William area. After all the submissions were collected, eight library designs were presented to the public to vote on their favorites.”

Megan Mellenkamp, the first-place winner from C.D. Hylton High School, said she got an assignment to create a design for a library card in art class and entered her design at the suggestion of her art teacher.

Meredith Seaberg, a runner up representing Osbourn High School, said was excited for the opportunity to participate in the contest. “I really wanted to do it because I like art, and I like the library. I hope people like it.”

Justina Ahinakwah, a runner up from Forest Park High School, said she liked the idea of a contest and new cards for a couple of reasons. “It means a lot to me. As an artist, I’m trying to grow and become known, so this is a big step for me. I also think it was a good idea because the cards needed to be more creative.”

Just before a ceremony to honor the three winners, Library Board Chairman Brian Murphy traded in his old card for one of the new ones. Murphy told the winners during the ceremony that their contributions to the library system would be around for some time. “So 15, 30 years from now, some old timer will be carrying a picture one of you three created and that is awesome.”

“It was an excellent way for teenagers to engage in an approachable way with the library system,” Murphy said of the contest after the ceremony. “These kids have left their mark on this community.”

The new library cards are available now at all library branches, Spence said. “We welcome everyone to come to the library and get their new library card. Especially since the library will only have a limited supply for this limited-edition card,” he said.