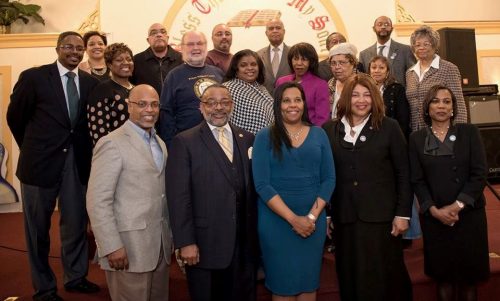 According to a release, Reverend Cozy Bailey, a local pastor and veteran, was elected to the position for a two-yeae term.

Bailey is an associate minister at First Mount Zion Baptist Church in Dumfries.

“The Prince William County NAACP will be the hub of the wheel for advocacy in Prince William, by strengthening relationships with current advocacy partners and creating new partnerships. We will continue to aggressively and deliberately defend against attempts to diminish or nullify the civil rights of citizens of Prince William County, Manassas City, and Manassas Park,” stated Bailey in a release.

More on Prince William County NAACP and the executive committee, from a release:

For several decades, the Prince William County Branch of the NAACP has worked to ensure civil rights compliance, equitable treatment of all, the attainment of educational excellence, economic empowerment, criminal justice, and civic engagement. The chapter meets the third Tuesday of every month in Manassas. All Prince William, Manassas City and Manassas Park residents are welcome. To learn more about the chapter or learn how to become a member, go to: www.pwnaacp.org.

“The Prince William chapter of the NAACP has experienced significant community support over the past two years. I am excited about President Bailey’s vision, which will turn that support into synergistic advocacy and action,” said outgoing president Karl Brower. “The presence of so many community leaders at the installation service is evidence of Cozy’s effective engagement with the Prince William and Manassas community. It signals an even more effective unit for the future.”

Rev. Bailey has been an ordained minister since June 2010. Prior to his ordination, Bailey served as a deacon in a variety of churches for over 20 years as he served as an officer in the U.S. Marine Corps. A native of St. Louis, Missouri, Rev. Bailey graduated from the Naval Academy and was commissioned as an officer in the Marine Corps upon his graduation with a Bachelor’s Degree in Mathematics. He obtained a Masters of Business Administration from Boston University while on active duty. Bailey served 23 years in a variety of venues, including Operation Desert Storm. Among the military citations received are the Navy Commendation Medal, Defense Meritorious Service Medal (2 awards), Meritorious Service Medal, and the Legion of Merit. Rev. Bailey retired as a Lieutenant Colonel.