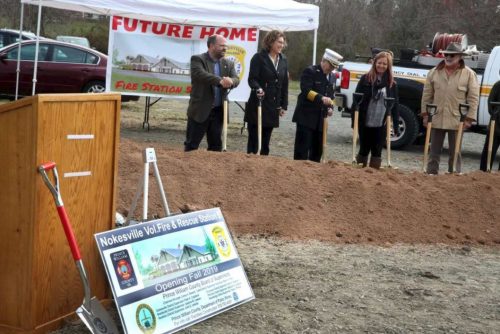 Fire and rescue personnel in Nokesville will soon be working out of a new station.

A groundbreaking ceremony was held at the future site of the new Nokesville Volunteer Fire Station.

“I really feel a sense of accomplishment, already, to stand here this morning and join so many of you for this groundbreaking,” Brentsville District Supervisor Jeanine Lawson said.

The estimated 18,200-square-foot facility will replace Nokesville Fire Station 5, which was built in 1963.

“It was originally basically just a garage with a couple of rooms attached, because everybody responded from home when the whistle went off,” Nokesville Fire and Rescue Department Chief Mike Silva said.

An addition that contained bunk rooms and a small kitchen was added in the 1980s.

Since its construction, the 55-year-old building has faced several renovations. Now, it’s time to move on to a facility that better meets the fire department’s needs.

“As a result of increased mission requirements, personnel requirements, and even the size of the apparatus that we drive — which can hardly fit in the bays now — it’s time,” Silva said. “It’s time for us to finally retire that building and moving into something new.”

The new fire station is being constructed next to Fire Station 5 at 12826 Marsteller Drive and is expected to be completed by summer 2019, according to a county release.

It will feature ew bays, a new physical fitness center, a community room, and administrative space.

Officials have anticipated the facility’s construction for quite some time.

More than nine years ago, Prince William County’s Fire and Rescue Association performed an architectural study to determine any improvements that needed to be made to stations countywide, according to Department of Fire and Rescue Chief Kevin McGee.

“Many major projects were identified, including total renovations and some total redos,” McGee said. “The Nokesville Fire Station 5 is the last big project from that study.”

Here is a highlight video:

Here is the full video: