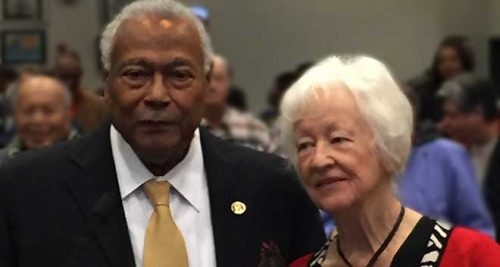 New Dumfries elementary school will be named for Covington, Harper

The name choice was finalized at a Prince William County School Board meeting this week, as a compromise between the two top name choices – Betty Covington and John Harper Jr.

Harper is a veteran, former school board member, former Vice Chair for the Prince William County Center of Arts, and an education advocate in the community. Covington is a former principal and teacher, and served on the school board for four terms.

The typical school naming process in Prince William County includes a committee made up of school board members, who then meet with the community to get their feedback on name ideas, before voting as a board on the final school name.

“This school board naming process, I think, is awesome…I don’t think it is conflicting, I think it’s complimentary…when else do you see 30 to 50 people getting up and singing the praises of someone other than themselves, for something that is good,” said Occoquan resident Corey Holeman.

People from all over the county came to advocate for both Covington and Harper, highlighting the work they’ve done in the community.

“The criteria for naming the school states that ‘consideration will be given to individuals with service to our country, to our communities, and to our school system’…Harper has not only one, but two Bronze Stars [medals]…in addition he also has several other medals,” said Holeman.

“I have known Betty for more than 13 years, and I had the distinct honor of serving with her on the Prince William County School Board…I can’t think of a more qualified person to receive the honor…she really gave her entire adult life, and then some, to our students,” said former School Board Chairman Milt Johns.

“I definitely recognize Mr. Harper for being a trailblazer in his service for the country and what he’s done in the community. I do want to recognize also that when we talk about trailblazing – Mrs. Covington also fits the mold,” said Potomac School Board Member Justin Wilk.

Following a vote, the name Covington-Harper Elementary School was finalized. Covington and Harper were both present at the meeting.

“John and I have been friends for a long time, so I’m glad that we didn’t have a lot of bickering and turmoil and disagreements,” said Covington.

The school is scheduled to open this fall.