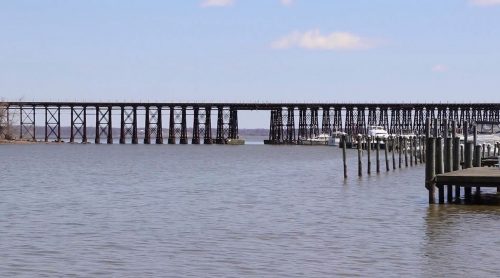 The United States Coast Guard has replaced navigation signs, which boaters use as they enter and exit three marinas on the creek, with danger signs.

Their actions were based on Neabsco Creek’s silting issue.

“This creek is a very shallow creek and it is constantly silting in from years and years of development upstream,” Hampton’s Landing Marina Owner Terry Hill said.

This week, county officials and about 30 stakeholders, including the United States Coast Guard and the U.S. Army Corporation of Engineers, met to discuss the coast guard’s actions and the impact they could have.

During the meeting, attendees asked the Coast Guard to reconsider its decision.

“We have between 800 and 1,000 boat owners who take their boats in and out of this marina, park their boats in slips or dry dock storage that are going to be impacted if the Coast Guard does not decide to reopen the marina,” Supervisor Frank Principi said. “And that will cause a negative impact on our quality of life and hurt the outdoor recreational amenity that we have here that we’ve grown to love over many, many years.”

The markers impact the time it takes for emergency personnel who use Neabsco Creek to respond to calls.

“With the danger signs out there, all of us are required to, if we’re going to run this boat out through there, we’ll have to run it at an idle speed,” said Jim McAllister, chief of the Occoquan-Woodbridge-Lorton (OWL) Volunteer Fire Department.

Running at idle speed can add five to six minutes to their response time.

Meeting attendees also asked the Army Corps of Engineers to perform a new survey of the creek. The survey will be done on April 16.

Meanwhile, stakeholders are centering their focus to the Neabsco Creek’s silting issue.

In previous years, the U.S. Army Corporation of Engineers has addressed the problem by dredging the channel.

The U.S. Army Corporation of Engineers is required to dredge and maintain the channel, which is a federal waterway, according to McAllister.

However, lack of funding has prevented it from doing any maintenance.

“In their defense, they say that they have not received any funding to be able to do that here and in many places around the country,” McAllister said. “So, the message I think we need to send out to our citizens is this is due to our federal government and our infrastructure issues that you hear, almost daily, in the news around the country. And here it is affecting us locally.”

Principi said the Prince William County community will need to discover a way to fund the dredging.

Ignoring the problem could significantly impact on the county’s residents and economy.

“Without that [funding], this will shut down the creek, it’ll shut down the businesses that are here, and it’ll take away all of the access that the county residents have to get out on the water and enjoy their weekends,” Hill said.