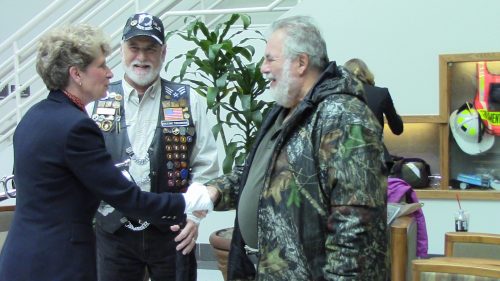 Not even the continued rainy weather could stop the Armed Forces & Memorial Day Ceremony that was held at the McCoart Administration Building in Woodbridge today.

The ceremony was held to honor the men and women that serve in the United States military, and to honor military members that died while serving.

“The military has a large presence here in Prince William County. We are home to Quantico, the Marine Corps Museum, and many fine service organizations, such as the VFW, Disabled American Veterans, and the American Legion…we’re proud of the rich military history and the presence of [the] military in our community,” said Supervisor John Jenkins.

The McCoart government complex has two memorials that honor the military – a fountain, and a granite slab with the engraved names of residents of Prince William County that died while serving in the military.

During the ceremony, Private “Willy” Samuel Brown, a Dumfries resident that died in France in 1918 while serving in World War I, was honored. Brown’s name will be added to the granite memorial on the property.

Army Iraq veteran Sgt. Steven Curry attended the ceremony, and was honored for his service. Curry lost his leg after being struck by an IED in Iraq in 2006, according to Supervisor Jeanine Lawson.

Curry recently received a new home in Nokesville from the military service organization Home for Our Troops.

“Homes for Our Troops is a national organization who brings together builders from the private sector and builds homes for wounded veterans. And we just had a ceremony and a ribbon cutting on Saturday in Nokesville for Sergeant Curry and his wife Samantha, and their two beautiful little elementary school girls,” said Lawson.