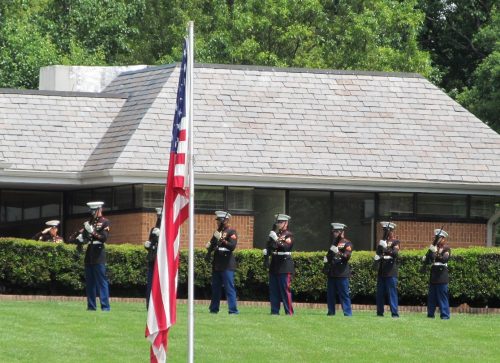 It was another beautiful Memorial Day ceremony at the Quantico National Cemetery.

According to a release, more than 10,000 soldiers, Marines, sailors, airmen, and their families came to the ceremony to honor those who had fallen fighting for the United States.

“We must remember our Soldiers, Sailors, Airman, and Marines, who gave their lives for us to be free,” stated retired U.S. Navy Rear Admiral John Waickwicz in a release.

The Memorial Day ceremony has been hosted each year at the Quantico National Cemetery since 1983, according to a release. This year the event was sponsored by the Potomac Region Veterans Council.

In addition to a speech from Waickwicz, there were speeches from Colonel and Commander of Marine Corps Base Quantico Joseph Murray, and retired Marine Colonel Frank Harris, according to a release.

During the ceremony, the “21-Gun Salute” was performed by the Marine Corps Rifle Team, and the U.S. Marine Corps Band played the National Anthem and patriotic tunes, stated a release.

The ceremony was also a chance for local Boy Scouts to take part in the Memorial Day tradition. According to a release, Boy Scout Troop 1369, which is chartered by VFW Post 7916, assisted with setting up the chairs for the ceremony.