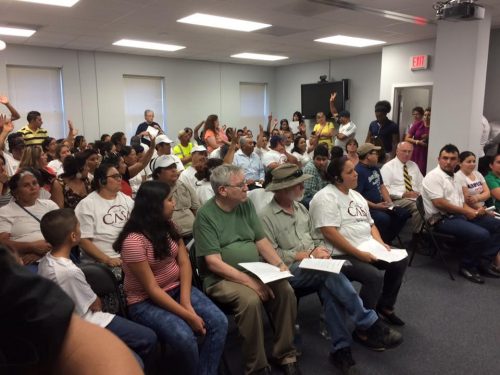 A community meeting was held in Manassas last week, to discuss the closure of the East End Mobile Home Park.

300 individuals living in 58 mobile homes at the mobile home park on Centreville Road will be displaced due to sewage issues that the property owner failed to fix. Back in April, the Manassas City Council decided to purchase the property for $1.9 million from the owner, in part to provide more time for residents to find new accommodations.

During the meeting, a representative from the City of Manassas Department of Social Services spoke with many of the residents that will be displaced, and stated that they will need to vacate the property by February 2017. Many residents were only just made aware that they would be required to relocate.

Social Services is offering relocation funds to qualifying East End residents, but there are many requirements that the individuals must meet in order to get those funds.

According to city documents, “the program will only consider those residents who have a lease with the East End Mobile Home Park and whose names are listed as tenants in the contract as qualified applicants.” Then the request must go through an application process.

The maximum funding per lease that Social Services will give to impacted residents is $2,300, according to city documents, and is based on household income. Homes with one resident can only have a gross maximum income of $3,170 up to a home with eight residents making up to $5,975 per month, according to city documents. If the residents make more than the income limits set by Social Services, they will not be eligible to receive any relocation funding from the city.

Residents will be required to furnish a letter from the landlord, stating that arrangements have been made with the individual to move their trailer or sign the trailer over to the landlord, according to city documents. Residents must also provide a government-issued photo ID, a verification of their income, and a lease or mortgage agreement from a new landlord, with proof of their new address.

The residents must file their application for the relocation assistance funds by January 31, 2017, said the Social Services representative.

Several residents had questions that the Social Services representative was unable to answer during the meeting. When one resident stated that $2,300 wasn’t enough to fund relocation costs, the Social Services representative stated, “This is a supplement – this is not meant to pay everything. This is just to assist you with some of your costs. It was never meant to pay for everything.”

Manassas Vice-Mayor Jon Way spoke with residents about the situation.

“We’re in a fact finding position now. We need to know, as a City government, what are the issues and problems [being faced] by the residents…this is a three-party situation; first is the residents, second is the owner of the property who has been delinquent in solving a sewage…problem, and has not taken the necessary steps – he claims he cannot take the necessary steps – and the City is only interested in buying the property for use as a public purpose, which is permitted by law. But we also need to know what the impacts are, so we can mitigate them,” said Way.

One resident asked why it took the City eight years of citations against the property owner to do something about the conditions at the mobile home park, but a clear answer to the question was not given.

“If we condemned the property, we would have to shut down the water and sewer supply immediately, and make all of the properties uninhabitable. We did not want to do that,” said Way.

Another resident spoke about how he intended to bring legal action against the City and the property owner.

In documents drafted by CASA, the organization asserted that the City and the property owner were negligent.

“The City denied the right [of] the community to be informed and violated the obligation that it has to inform the community, using the ruse to conceal information about negotiations and arrangements with the owners and avoiding [meeting] with the community to avoid giving explanations…the Mayor, Council of the City of Manassas, [and the] owners of East End Mobile Home Park and the company that manages the property have violated the Housing Act of Virginia,” stated a document from CASA handed out to meeting participants.

The property owner and the property management company were not present at the community meeting.