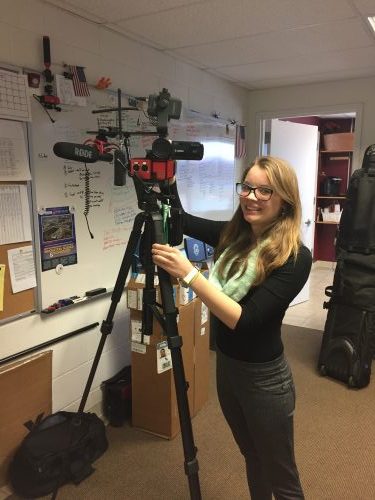 Meet Erin: The newest member of What’s Up Prince William

We’d like to welcome Erin Flynn, a recent James Madison University graduate and movie lover, who is the newest member of the What’s Up Prince William team.

Hi, I’m Erin, the “newbie” at What’s Up Woodbridge and one of Northern Virginia’s newest residents. I hail from Harrisonburg, where I received a bachelor’s in journalism and writing, rhetoric and technical communications from James Madison University.

After I graduated in December 2015, I spent a little more than a year serving as the education reporter at Harrisonburg’s newspaper, the Daily News-Record, before moving to Fredericksburg, where my sister and her two spoiled pups reside. Prior to studying at JMU, I was in Lynchburg, where my parents, oldest sister, brother-in-law and niece live.

It’s only been a week since I moved to northern Virginia and I’ve learned so much – like what “Aldi” and “Weiss” are and the busiest traffic times (all the time, apparently). In addition to experiencing my first NOVA “blizzard,” I’ve been refreshed on filming and video editing techniques. On Thursday, I attended my first ribbon cutting ceremony at the Bill Mehr Drop-In Center, where I met a few Prince William County residents and leaders.

Unlike my previous job, I have a bit more creative freedom at What’s Up Woodbridge, especially when it comes to bagpipes. Laughter isn’t a rare sound in our office. Usually one of us cracks a joke that is followed by a chain of remarks that occur throughout the remainder of the work day. But we also take our work seriously and know that what we’re doing is important.

My coworkers have said that there’s never a dull day at What’s Up Woodbridge, and as the week has progressed I’ve learned that they’re right. No day is the same, and there are always new events and stories to cover. I look forward to sharing that information with you.