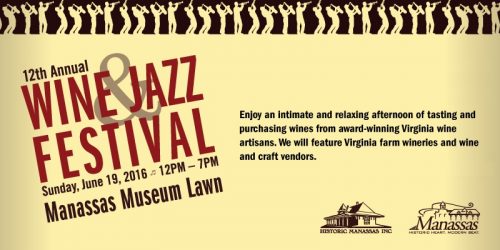 Then you’re in luck, as the 12th annual Manassas Wine & Jazz Festival is coming up on June 19.

The event will take place from 12 p.m. to 7 p.m. on the Manassas Museum lawn at 9101 Prince William Street, according to a release. The rain date for the event is June 26, stated a release.

This year’s jazz headliner is Marcus Johnson, who will be joined by several other jazz performers, according to a release.

“This event is an intimate and relaxing afternoon of tasting and purchasing wines from award-winning Virginia wine artisans. We will feature Virginia wineries and wine and craft vendors,” stated a release.

Food from Downtown Manassas restaurants will be featured during the festival, according to a release.

According to a release, VIP tickets are $90 in advance and $105 at the door, and come with early entrance, wine tastings, a tented area with exclusive setting, food and wine pairings and a $10 gift card to be used in Downtown Manassas.

The entertainment schedule, from a release: