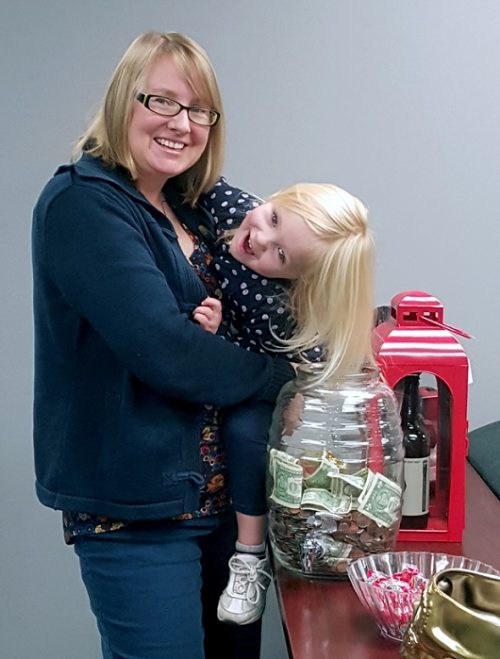 Sometimes blessings can come from curses.

That’s the idea of Imagine, Inc.’s “Blessings from Curses” campaign, which started as an office swear jar and turned into a fundraiser for an area family in need.

According to a release, Imagine’s swear jar was able to raise $585 for the Youngs – a Montclair family that was displaced by a fire in their home over the summer.

One of the family members, Emma Young, has been very involved in the community, and Imagine felt that they needed to help in some way.

“We knew that any support that we could give Emma and her family would be paid back to the community tenfold,” stated Imagine CEO Patrick King in a release.

More on the Young family, from a release:

He noted that even as the family of three lived in a hotel for almost six months, Young expressed gratitude for simple fortunes, such as having clean water with which to brush her teeth. Immediately after the fire, she started GoFundMe campaigns for neighbors also displaced by the fire, while seeking nothing for her own family.

Even after a car accident this fall totaled the family car and left her husband unable to work for several weeks, Young retained her sense of gratitude. King reported that when his staff approached Young about the fundraiser her initial response was, “Me? But I’m so lucky,” as she began listing her blessings.

The first purchase to be made with the donated funds? “We promised [our daughter] that she could pick out a new panda,” said Young, explaining that her four year-old’s favorite stuffed animal was destroyed by the fire.