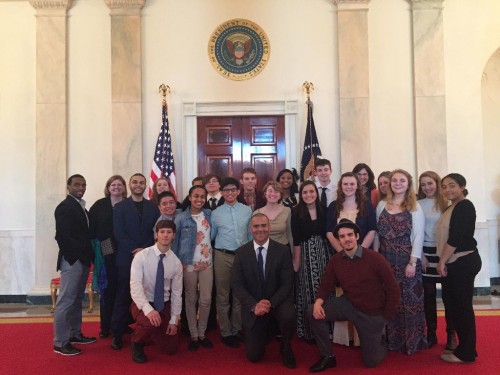 15 students from Osbourn High School were among those invited to visit the White House in March.

According to a Manassas City Public Schools release, the students were invited to take part in First Lady Michelle Obama’s student workshop that included the cast of Broadway’s hit show ‘Hamilton’.

During their visit, the Osbourn students were able to meet with the cast of ‘Hamilton’, as well as the President and First Lady Obama and Vice President Joe Biden, according to a release.

“The cast was so welcoming and kind to all of us, it made us all feel like a little family,” stated student Ana Silva in a release.

More on ‘Hamilton’, from a release:

Hamilton, an extremely popular Broadway show, uses modern music genres and Broadway theatrics to tell the story of historical American figure Alexander Hamilton. The White House program was designed especially for students by the Gilder Lehrman Institute of American History and Hamilton producer and actor Lin-Manual Miranda, who helped create the show by using historical documents. The students, under the guidance of Osbourn AP U.S. History teacher and Social Studies Department Chair Carrol Woodbeck, were tasked with creating their own Hamilton-inspired special projects based on historic documents and primary sources to perform for the White House. “It was beyond exciting,” said Woodbeck. “Instead of being token high schoolers, we were the event.”

The students had two weeks to prepare for the performance, according to a release.

“Going to the White House and meeting so many amazing people and getting to shake hands with the President and the First Lady was a once in a life time experience. I’m so thankful for being a part of it,” stated student Emily Williams in a release.