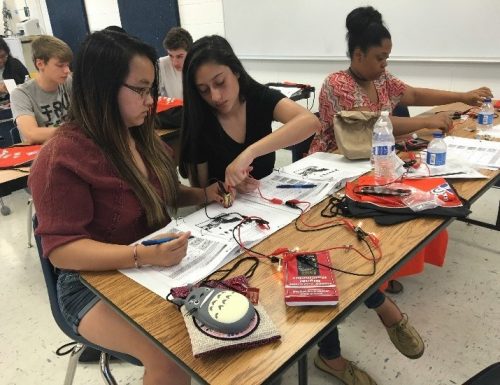 25 Manassas students learn about cybersecurity, thanks to VDOE grant

The cybersecurity field is growing across the United States, and students got a chance to learn about the field, thanks to a grant from the Virginia Department of Education (VDOE).

According to Manassas City Public Schools, 25 rising 10th, 11th, and 12th grade students participated in the 2016 CyberCamp, and got more than 70 hours of cybersecurity instruction time.

“The program actively engaged participants in hands-on, project-driven activities that focused on exposing students to the field of cybersecurity,” stated a release.

Participants in the program had a chance to visit Micron Technology in Manassas, and were introduced to Lockheed Martin Engineering Manager Geoff Gates, CEO of Secure IT Experts Nicholas Hoover, Manassas City Police Detective for the Investigation Services Division Mike Gimmell, and Destined2Suceed President Charles Britt, according to Manassas City Public Schools.

“I love robots, and it was nice to have someone break down a simpler programming language for me to fully understand,” stated student Mandi Cottrill in a release.

“This camp helped me understand more about cybersecurity and how I can make a career out of it. I finished the camp with a greater knowledge of cybersecurity, as well as a bigger belly,” stated student Sean Connolly in a release.