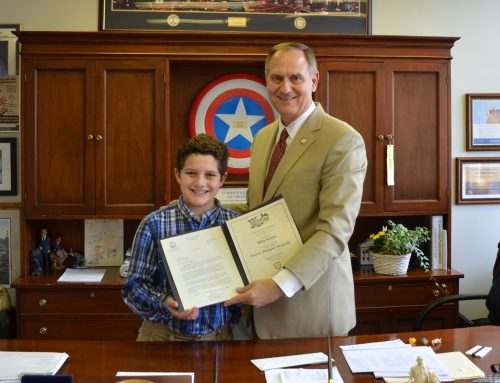 As part of the program, Kotlus will spend two months, starting next month, during the Virginia General Assembly’s session in Richmond, working alongside 38 students from Virginia.

“I am very excited about this opportunity. I have always been interested in politics and government, and even though I will be doing clerical duties, I will have a front-row seat to history,” stated Kotlus in a release.

As part of the House Page Program, students work on tasks including assisting committee clerks, distributing documents, running messages, and other administrative duties, according to a release.

Kotlus lives in Anderson’s district, and Anderson expressed his excitement at having Kotlus join him in Richmond.

“The Page Program provides a once-in-a-lifetime opportunity to young people in Virginia. For decades, it has been a positive, life-changing experience for the students who have gone through the program. I am very excited to have Riley join us in Richmond this term, and I think that he’ll be a tremendous asset to our team in the House of Delegates,” stated Anderson in a release.

Kotlus and the other pages from around Virginia will leave for Richmond on January 8, according to a release.