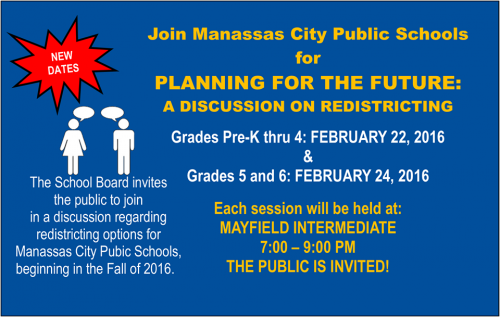 Will your Manassas student be changing schools?

Manassas City Public Schools (MCPS) will be hosting two redistricting meetings this week, to talk about the future of the city’s school districts.

The meetings were rescheduled due to the snow that moved into the area last week, according to an MCPS release, and will be held on February 22 and February 24 from 7 p.m. to 9 p.m. at 9400 Mayfield Court in Manassas.

The February 22 meeting will be for students pre-K through fourth grade, and February 24 will be for grades 5 and 6, according to a release.

All five of Manassas’ elementary schools and the Baldwin and Mayfield intermediate schools will be impacted by the redistricting, according to a release.

“Manassas City Public Schools has experienced tremendous growth over the last few years. In order for the division to balance the enrollment needs of our current and future students, proper planning must be in place, which includes making sure that our facilities are able to handle the growth,” stated Superintendent of Schools Catherine Magouyrk, in a release.

Students and parents are asked to attend the meetings and give feedback on what they’d like to see as part of the redistricting, as these comments will be used by a consulting firm that will be making formal recommendations on new district lines.

Following the meetings, there will be two public hearings on March 29 and 30, before the final approval of the new school district boundaries on April 12.