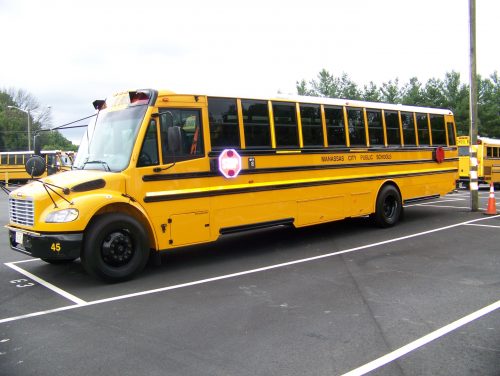 Manassas City Public Schools (MCPS) and the Manassas City Police Department (MCPD) have partnered together to address the growing problem of illegal passing of school buses.

“When the stop arm is deployed, the sensors automatically detect a vehicle illegally passing the stop-arm in both directions and captures video of the violation including the vehicle’s license plate. The video and corresponding images will then be reviewed by the MCPD for approval prior to a citation being issued,” stated a release.

In Virginia, the penalty for illegal passing of a school bus with a stop-arm camera system is $250, according to a release. No points are added to the driver’s license, stated a release.

Force Multiplier, a company that is a leader in school bus safety programs, was approved to work with MCPS on this project. The systems that Force Multiplier installed “provides GPS capabilities, six cameras on the inside of the bus, two camera boxes on the outside of the bus, panic button for emergency use, and real time video and voice communication,” stated a release.

Force Multiplier installed the camera system on all MCPS buses at no cost to the school division.

“The program is fully funded by the stop-arm citation payments.  As the new procedures are being introduced, warning citations will be issued through September 26, 2016. The issuance of official citations will begin after that date,” stated a release.