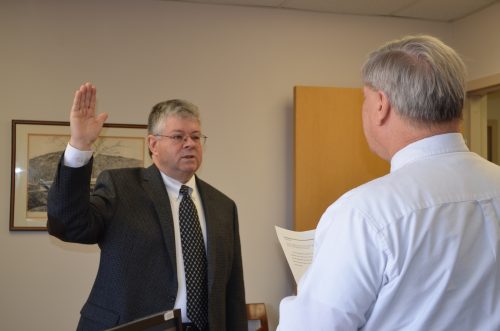 The City of Manassas School Board has a new member.

Peter O’Hanlon was unanimously voted in as the new appointed member of the school board, to fill the seat vacated by Pamela Sebesky, who was elected to the Manassas City Council in November.

According to a release, O’Hanlon will serve in the appointed position until November 2017, when a special election will be held to fulfill the rest of Sebesky’s original term, which was set to be completed in December 2018.

More on the appointment and O’Hanlon, from a release:

During his first appearance with the board at its January 10 regular meeting, O’Hanlon stated he was humbled by the appointment and thanked friends, family and the board for their support.  “Mr. O’Hanlon has been a familiar face in the City of Manassas for many years, leading and volunteering as his children progressed through the school division,” said Tim Demeria, board chairman.  “With this appointment, we trust that he will bring a different, but welcomed perspective to the board and we look forward to working with him.”

O’Hanlon has been involved in the community and Manassas City Public Schools (MCPS) for several years, including serving on the Parent Teacher Association (PTA) at Haydon Elementary, Mayfield Intermediate and Metz Middle schools.  He also served in leadership capacities in his homeowners association and other civic organizations.  Additionally, he is a 2015 graduate of the MCPS Parent and Community Leadership Academy (PCLA).

O’Hanlon and his wife, Ann, are the parents of five children who received their education through Manassas City Public Schools, the youngest now a senior in high school.

“I retired in June 2015 after thirty-four years of government service,” said O’Hanlon. “I now plan to utilize my time and experience to increase my service to the Manassas City community.”