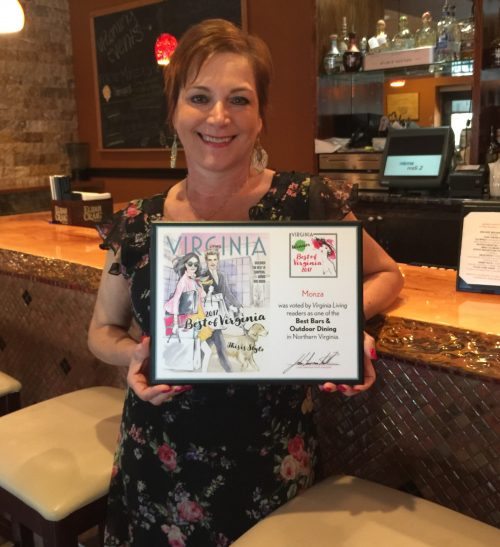 According to Monza’s owner Alice Pires, the restaurant located on Battle Street received two awards – one of having the best bar in the area, and one for the best outdoor seating.

“We are honored that we won the Virginia Living Magazine [award], which is a state-wide magazine. We won for the Best Northern Virginia Bar and Outdoor Seating. It’s a huge pride to be recognized in such a respected magazine,” said Pires.

Monza serves upscale but reasonable Portuguese and Italian inspired food in a bistro setting, with lots of beer and wine options.

“Our bar is known for the best cocktails in the area, and our pizza also [are] the best pizzas in town,” said Pires.

One selling point that helped Monza to win the award for Best Outdoor Seating is the bands that come out to perform on Battle Street weekly.

“They chose us because of the music we have on weekends – we close the street, we have bands playing on the street,” said Pires.

According to Pires, who also owns Carmello’s restaurant, the inspiration came to open Monza following a fire at Carmello’s.

“We had a fire in 2010 [at Carmello’s] and we reopened in 2011, and that’s when we created Monza, as Carmello’s [sister] restaurant. We wanted to go after more casual dining, the town needed a nice, upscale bar and so we did a lot of research and came up with Monza,” said Pires.

In addition to serving up food and cocktails, Monza is also very involved in the community.

“We love giving back to the community because of what they give us. So we do things for SERVE, CASA, [the] Cancer Society. Mostly with the local organizations,” said Pires.