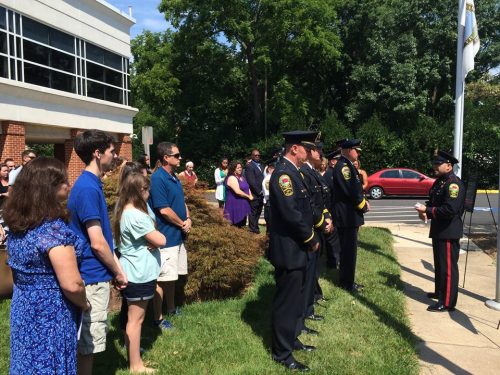 According to a release, Conner, who was an officer for Manassas police, was killed on July 24, 1988. “Sergeant John Conner was shot and killed after responding to a report of a man sitting on his front porch with an AR-15 rifle and firing shots in the air,” stated the Officer Down Memorial Page.

Each year a ceremony is held on Conner’s behalf.

“Sgt Conner made the ultimate sacrifice and to celebrate his life and service, MCPD and the community it serves came together once more to offer scholarships in John’s name to the dependents of MCPD employees and youth in the Manassas community, appreciate its past, present, and future staff, and to lay a wreath in his name,” stated a release.

This year, six students who are dependents of Manassas City Police Department employees, were awarded scholarships in Conner’s name, according to a release.