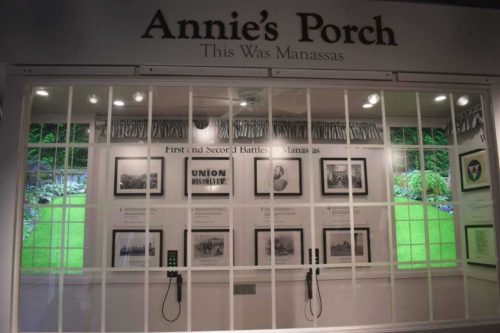 The history of Manassas is being told at the Manassas Museum.

A new immersive exhibit called “Annie’s Porch: This Was Manassas” opened today, according to a release.

It features stories about Manassas during the Civil War and World War II, and the Manassas Industrial School for Colored Youth.

The exhibit is named after former museum volunteer and board member Ann Harrover Thomas.

It is one of several updates that have been made to the museum’s permanent gallery.

In addition to “Annie’s Porch,” the museum has added a display that focuses on sports and entertainment, a “reinvigorated” display on the town of Manassas’ development, and a photo collage about the community’s diversity.

The displays feature stories, images and objects that the museum has wanted to share for quite some time, according to Curator Mary Helen Dellinger.

“I am very pleased with how this turned out. We knew that adding the Annie’s Porch exhibit would allow for a re-evaluation and re-configuration of the space around it,” Dellinger said. “We took our time and got feedback from staff, volunteers and the community. The end result is something that everyone will enjoy.”

Temporary displays can also be found throughout the museum.

“Artistic Expression,” an exhibit that features art designed by Osbourn High School students, is available for viewing through April 1.