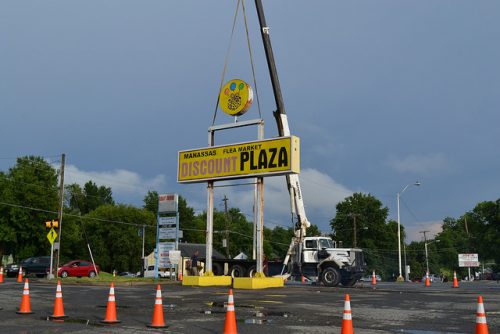 This week, the decade’s old “Manassas Flea Market Discount Plaza” sign has been removed from its location on Grant Avenue, signifying the beginning of a planned beautification and improvement project for the area.

According to City of Manassas Public Information Officer Patty Prince, Manassas has purchased the flea market site on Grant Avenue, with the intention of turning it into a public use space.

“There’s still some ongoing leases, that won’t be up for [around] a year and a half, so we’re honoring those. And then we will tear it down, and build a public use building,” said Prince.

The specifics on what we built on the site are still being discussed by the City Council, according to Prince.

The impending improvements are part of the Grant Avenue Streetscapes project, which is a committee of residents that are working ideas for how to improve the space.

Initial planning and design for the project have already been funded, according to city documents.

No construction projects for the site have been funded yet, according to county documents.