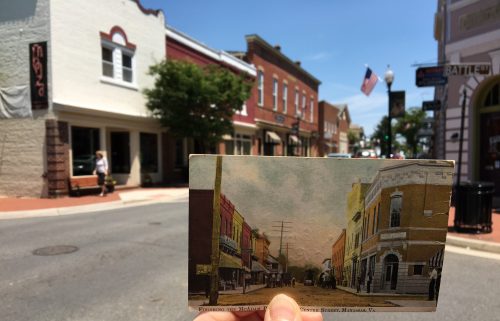 City of Manassas employee Lisa Sievel-Otten has authored her second book about the city, and is donating the proceeds to Liberia Plantation’s restoration efforts.

According to a release, her aptly titled book ‘Manassas’ talks about post-Civil War life in the city. Through vintage postcards, Sievel-Otten “tells surprising stories from the emerging town and about the creation of the Manassas National Battlefield Park,” stated a release.

More on the book, from a release:

Only a decade before, early Manassas residents had been on opposing sides of a deadly battle. And yet they came together in the 1870s to build a town and a sense of community.  Many of the book’s images exist only in post cards. Without these post cards, no visual record of many Manassas buildings, sites, and streetscapes would remain.

“In a time when instant communication meant walking down the street to a neighbor’s house to deliver some news, Manassas citizens also helped to build a strong community by joining churches and civic organizations. Much of the town turned out for school concerts and ball games, Dairy Festivals and Horse Shows,” stated Sievel-Otten in a release.

More on Sievel-Otten, from a release:

“I hope readers will appreciate that early Manassas residents were able to overcome the division of the Civil War, and come together to build not only a town government, but a real community,” said Sievel-Otten.   “I hope they will also appreciate the struggles of African-Americans who were constrained by so many laws, yet built a positive community for themselves and their families.”

You can get a copy of her latest book at manassasechoes.com or by visiting the Manassas Museum Store.