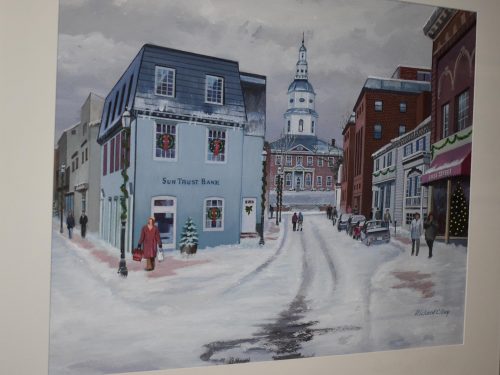 The late Manassas artist Richard Guy’s work is now on display at the Manassas City Hall.

“Guy’s daughter Marianne Pendlebury selected the works on exhibit to showcase her father’s affection for the Manassas area, but she also included some favorites from the Washington region,” stated a release.

More on Guy, from a release:

Guy began his career as an illustrator for the U.S. Air Force and then worked for an art studio in Manhattan before starting his own studio. He created such works as the first drawing of the Pepperidge Farm goldfish cracker package, exhibit paintings for the U.S. Department of the Interior, a permanent portrait collection for the U.S. Patent Office, drawings for the U.S. Department of State, and many renderings for Red Cross manuals. Over the years, he painted eight views of the U.S. Capitol building that were made into Christmas cards and purchased by members of Congress.

After moving to Manassas in 1967 with his wife and four children, Guy became interested in the area’s history, drew Civil War historical sites throughout the region, and created paintings of local sites for Manassas Museum Christmas cards. He was an active supporter of the museum, Old Town Business Association, and Art Beat Gallery. He passed away in 2014.

His family recently supported the conservation of two museum paintings in honor of Richard, his late wife Shirley, and his late son Allan, also a successful commercial and studio artist.

Individuals interesting in viewing Guy’s work will find it at 9027 Center Street, where it is open to the public Monday through Friday from 8 a.m. to 5 p.m.

The Manassas City Hall has a new art exhibit each month.