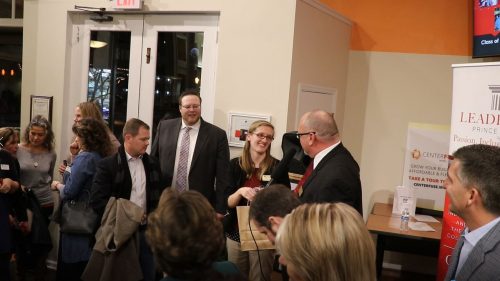 Leadership Prince William (LPW) is encouraging its alumni to help improve its programs by providing feedback.

The event was held at Centerfuse in Downtown Manassas last week.

Short, who previously served as the Prince William Chamber of Commerce’s director of marketing and communications, began her new role this month.

“I’m really excited about embarking on this new journey, and I have some big shoes to fill with each of the Kathy’s,” Short said. “You know, Kathy Ellington came in and she got this program up and running, and then Kathy Bentz took it to another level and we now have this awesome summer youth academy.”

Short plans to focus on LPW’s growth and the engagement of its alumni.

Short encouraged the event’s attendees to let LPW know what they are doing right and what could be improved.

“Some of you may have felt like there really wasn’t a place for you after you graduated, so I want to hear about that too, and we’re going to find a place for you to fit in this organization,” she said. “Because the exciting thing about being accepted to LPW is that feeling that you’re going to be a part of this fraternity, so we want that to carry on after you graduate.”

Alumni also learned about Bowling 4 Scholarships, an event LPW is hosting on February 23

“It is a lot of fun,” said LPW Chair-Elect Jackie Krick. “You get to do funky things, dress up, name your team — however you want to express yourself, feel free to do it.”