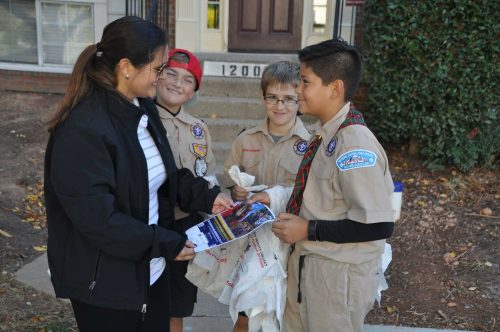 *Clarification – “We had 41,831 lbs donated. 35,928 of that was sent directly to ACTS, the rest was sent to other local churches, charities and food banks,” stated Scouting for Food Coordinator Doug Deem.

The Occoquan District Boy Scout units were able to collect 35,928 pounds of food for this year’s Scouting for Food drive.

According to a release, 61 units participated, collecting food from individuals in eastern Prince William County.

Donations were collected on November 12 and weighed, sorted, and loaded onto a truck donated by Appliance Connection, according to a release.

“This year was down from past years, but still a great response by the eastern Prince William community,” stated a release.

The food has been distributed to local churches, food banks, and local charities like ACTS, which received a bulk of the food donations.

“This food will be used to feed the families in Prince William County and will be a part of the ACTS’ Operation Turkey,” stated a release.