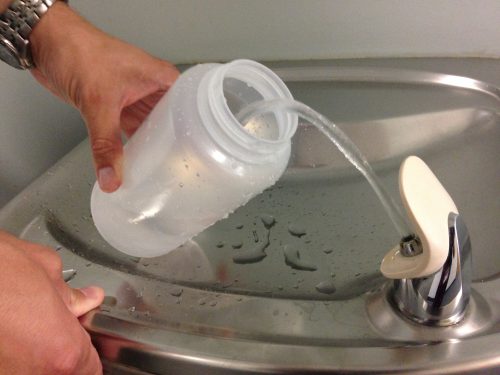 Lead testing on water at Manassas schools come back clear

To combat concerns from the media about drinking water safety, the City of Manassas Utilities Department and Manassas City Public Schools are working together to ensure that school drinking water is safe for students.

“Because the results have been optimal, samples consistently testing below the EPA’s action level of 15 parts per billion (ppb), the City is now on a reduced testing level,” stated a release.

Manassas City Public Schools spokeswoman Almeta Radford stated the EPA standard for schools is 20 ppb, and the results of the testing have been below this threshold.

Back in June, lead testing was conducted at all Manassas Schools, according to a release.

More on the testing, from a release:

This testing was not required, but was performed as an additional safety measure for the students of the school system. The EPA guidelines were carefully followed. Samples were collected from water coolers, bubblers, and faucets that may be used for drinking.

Samples were taken to the Prince William County Service Authority (PWCSA) who partnered with the City for laboratory analysis. A total of 98 samples were tested, 95 of which contained no measurable lead. Three samples at three different schools contained detectable lead levels with only one of those results was above the EPA action level of 15 ppb. The three devices that had measurable results have been taken out of service and are being replaced before the school year begins.

Not only did the City of Manassas Utilities Department and the MCPS work together, but they consulted with the Virginia Department of Health (VDH) Prince William Health District, the VDH Office of Drinking Water, and the Prince William County Service Authority. The City of Manassas is committed to providing safe drinking water and will continue to work with our local, regional, and federal partners. Visit www.manassascity.org/Pb for more information.