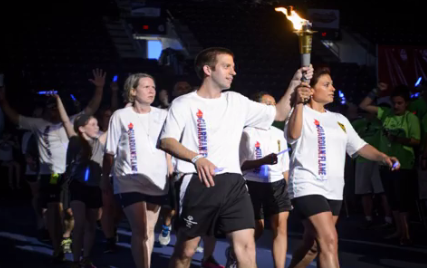 The Law Enforcement Torch Run had its kick-off ceremony yesterday in Occoquan.

According to a release, each year more than 21,000 athletes take part in the Law Enforcement Torch Run for Special Olympics Virginia.

During the ceremony in Occoquan the “Flame of Hope” was lit, which signifies the beginning of the several hundred mile journey of several officers that will be running it down to Richmond, according to a release.

The Torch Run began 33 years ago when Wichita, Kanassas Police Chief Richard LaMunyon and five officers carried a torch for the Kansas Special Olympics, according to a release.

The ceremony also set off the countdown to this year’s Virginia Special Olympics Games, which will take place on June 10 and 11 in Richmond, stated a release. More than 100 law enforcement officers from Virginia, including Prince William County Sherriff Glendell Hill – who is the 2016 State Chair of the Virginia Torch Run – will be taking part in the games this year, according to a release.

More on the Flame of Hope run, and this year’s games, from a release:

On June 10, Metro Richmond officers will run the last leg from the Capitol to the University of Richmond’s Robins Stadium, where they’ll join more than 1,500 Summer Games athletes and officially open Summer Games. For the Northern Virginia route (Region 1), which begins at 9:30 am June 9 at the Iwo Jima Memorial, visit the Torch Run Web site, www.torchrunva.com, and click on the Routes link.