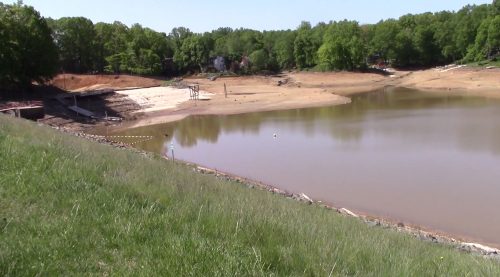 The water in parts of Lake Montclair may appear lower than normal to passerbyers.

Construction has begun by the lake, where the water has been drawn down by 20 feet.

The new requirements specify how much water a spillway should be able to hold.

“When that changed, we had to have a study done to see what the capacity of our spillway was, and it revealed that it was not sufficient to handle the amount now required by these new guidelines,” Field said.

In addition to deepening and widening the spillway, officials are installing an underground “cut back protection wall.”

“The cutback protection wall will stop the erosion at a certain point ahead of the lake so that we can guarantee that the lake will not drain out through an eroded spillway,” Field said.

The work is expected to take between four and six months. According to Field, it’s a public safety project.

If a major flood occurred, it could destroy houses and wipe out major roadways, including I-95 and Route 1.

“All of this is to ensure that we have an adequate spillway here to funnel and accomodate the water the way it’s supposed to be done in order to protect everyone downstream,” Field said.

Since the water has been lowered, county residents have begun discovering various objects, including bottles and a chair.

Photos of the objects found can be seen on the “Stuff I found in Lake Montclair” Facebook page.

Officials are asking community members to avoid walking on the lake’s bottom, even if it looks solid.

“It’s extremely hazardous … It’s really a risk of getting stuck and having to be rescued,” Field said.