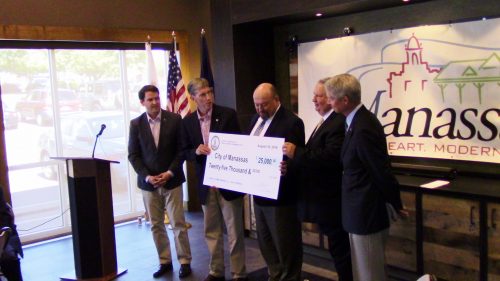 KO Distilling will be expanding their operations in Manassas.

The distillery, which opened up just under a year ago at 10381 Central Park Drive, Suite 103, is the recipient of one of the Governor’s Agriculture and Forestry Industries Development Fund (AFID) grants for $25,000 – which is being matched by the City of Manassas – to use on expanding their business.

Secretary of Agriculture and Forestry Todd Haymore said that KO Distilling is one of more than 38 businesses to receive one of the grants to boost agribusiness in Virginia.

“The reason we created the AFID was to help agriculture businesses – agribusinesses…it was a certain sector of the economy…that was being left out. As a guy who was born and raised in Pittsylvania County, right outside of Danville…I thought it was wrong. So we worked with the McDonnell administration to create the AFID,” said Haymore.

According to Haymore, KO Distilling owners Bill Karson and John O’Mara will also be investing $675,000 into the expansion which will expand their existing industrial space, triple their capacity, and create six new jobs.

Haymore also stated that the distillery will be sourcing 100% of the corn, rye, and wheat they use to make their products from Virginia farms, within the next three years.

“This has been a great journey for John, and me, and our company…when we are able to use this grant money we’re going to be at least tripling – maybe quadrupling the amount of grain that we use…and we’re going to double the number of people,” said Karlson.

Virginia’s craft beverage industry is growing, according to Haymore.

“The distilled spirit industry in Virginia is booming…Virginia is now home to 270 wineries, 150 plus craft breweries, more than 40 distilleries, about a dozen cideries…we are now known as the preeminent East Coast destination for craft beverages,” Haymore said.