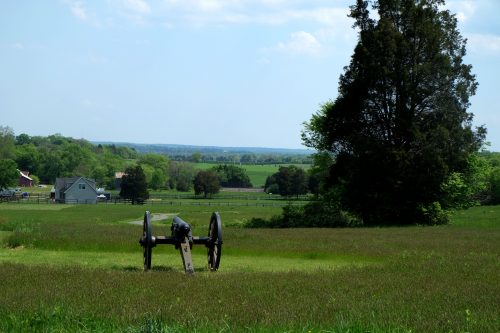 How will Kettle Run and Bristoe Station battlefield lands be preserved?

After completing a study on the Kettle Run and Bristoe Station battlefields, the county is trying to determine how to preserve the land.

According to a county release, the Prince William County Planning Office completed the study with a $77,000 grant from the American Battlefield Protection Program, which looked at preservation options for the Civil War-era battlefields.

Chris Mackowski, member of the organization Emerging Civil War, and a professor at St. Bonaventure University, weighed in on the battlefields and talk of preservation.

Currently, between the two battlefields, the county only protects 140 acres in a park, which includes a small visitor’s center, a cannon, walking trails, and a Confederate cemetery. The 140 acres is only 20% of the battlefield acreage, according to Mackowski.

“But that is only one portion of what was once the battlefield,” said Mackowski.

Mackowski said that while many people don’t know the importance of the Kettle Run and Bristoe Station battlefields, they did play a big role in the Civil War.

“There were two fights that took place pretty much on overlapping ground. The first one, the Battle of Kettle Run, was a small engagement – part of the Second Manassas Campaign in August of 1862. And that’s pretty well known…because the actions relate to Stonewall Jackson’s movement up to Second Manassas, which then erupts into this giant battle. So Kettle Run played a very important role in that larger action. And then in the following year and a half later, the following fall of [18]63, the armies moved through there during the fall, and they’re kind of jockeying for position, and that’s a more overlooked period…so it’s not a big, sexy, attention-grabbing event, but I think that make’s Bristoe all the more important…there’s a lot we can learn about strategy, tactics, and politics…so that’s what makes preserving Bristoe Battlefield particularly important,” said Mackowski.

On the edge of the currently preserved section of the Bristoe Station Battlefield, there is a large housing development, and there are other structures on the unprotected acres that would impede some preservation efforts.

“[The] park exists because the developer [of the housing development] made some concessions and donated some of that land…but there’s nothing more you can do with that land,” said Mackowski.

So while the full 80% of unprotected battlefield cannot be reclaimed, the hope is that residents will get involved in the process, and help shape the decision on what will be preserved.

“That’s what this whole planning process is trying to determine – there’s 80% more of the battlefield – what do we want to do about that? What can we do about that…a bunch of different options exist there. I think everyone would probably like to avoid having the county just fork over money for stuff. The county government can’t pay market value. A lot of tax payers probably don’t want their tax dollars spent that way. Nobody likes it when things break down into eminent domain. There are preservation groups that are highly active that would step in and purchase that ground, and either donate it to the county, or sell it at assessed value – which the county can pay – so there are a bunch of different options,” said Mackowski.

A public meeting was held on May 27 to kick off the community dialogue about what to do with the battlefield land.

“Here’s an event of national significance, and yet it has a very direct impact on local landowners. How’s it going to effect the future of so much property? How’s it going to affect someone’s assessed property values because they’ve got a park next door,” said Mackowski.

While the meeting has already passed, there will be additional opportunities for residents to get involved.

“Even though there was a hearing, [the county is] still accepting comments. They’ll be more discussions, more meetings, [and] more time to decide what to do with the information, so it is an ongoing process. There’s plenty of opportunity for public participation and comment,” said Mackowski.