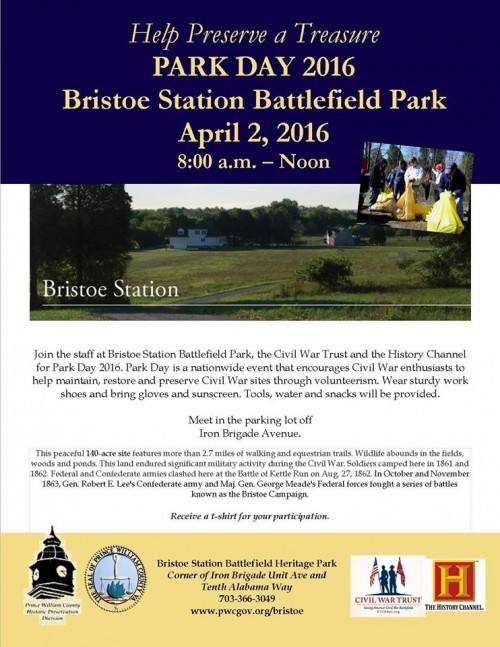 Want to be a part of the community, and help to keep Civil War sites going? Then get involved in this year’s Park Day at Bristoe Station Battlefield Park in Bristow.

According to a release, Park Day is a “nationwide event that encourages Civil War enthusiasts to help maintain, restore and preserve Civil War sites through volunteerism.”

Bristoe Station Battlefield Park is a 140 acre site with more than 2.7 miles of walking and horse trails, according to a release.

“This land endured significant military activity during the Civil War. Soldiers camped here in 1861 and 1862. Federal and Confederate armies clashed here at the Battle of Kettle Run on August 27, 1861. In October and November 1863, General Robert E. Lee’s Confederate army and Maj. Gen. George Meade’s Federal forces fought a series of battles known as the Bristoe Campaign,” stated a release.

Members of the Civil War Trust and the History Channel will be on site with volunteers and the staff of Bristoe Station Battlefield Park at the corner of Iron Bridge Unit Avenue and Tenth Alabama Way, to help clean up the site from 8 a.m. to 12 p.m., according to a release.

Volunteers will also receive a t-shirt for their participation in Park Day.