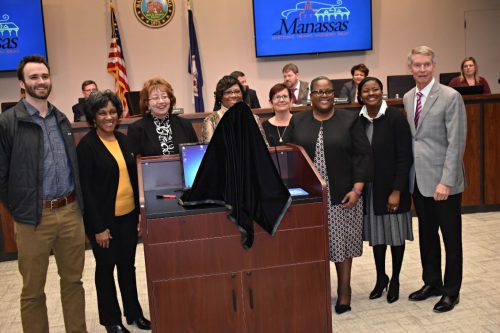 The City of Manassas is remembering a historical figure’s commitment to the community.

A few local women were the first recipients of the Jennie Dean Legacy awards at a City Council meeting on Monday.

Jennie Dean, who was born a slave, established the Manassas Industrial School for Colored Youth (MIS).

At least 6,000 students attended school between 1893 and 1938, according to a release from the City of Manassas.

Here is more information about the awardees:

In addition to being recognized, the women uncovered a statue of Dean that will be the centerpiece of the Manassas Industrial School/Jennie Dean Memorial.

Officials are raising funds to update the memorial, which opened at 9601 Prince William Street in 1995.

Christopher Hill of Bristow made the Jennie Dean statue using a photo and information he gathered by researching that time period.

“Jennie Dean was, above all, an altruist determined to elevate the welfare of her people through education, faith and tradesmanship. In order to convey this, I have designed Jennie Dean with an outstretched hand reaching towards viewers, as if inviting to lift them up,” Hill said in a release. “Over time, I hope that people will take her hand and wear away its patina. When this hand begins to polish and shine, it will reflect the engagement Jennie Dean continues to inspire in the community.”

More information about the Manassas Industrial School/Jennie Dean Memorial is available on the City of Manassas website.