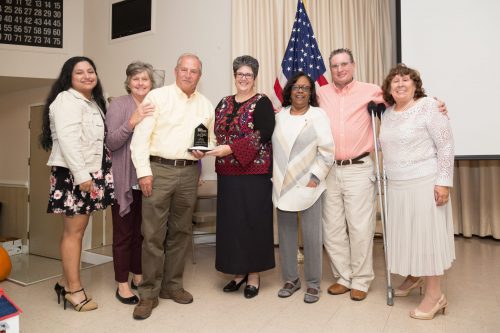 The award was given by Project Mend-A-House (PMAH), and is given to individuals with a long history of service to the community.

According to a release, Sharon Pandak and Manly Garber are previous recipients of the award.

More on Jenkins, from a release:

A retired Vietnam Veteran, Mr. Jenkins and family settled in Prince William County in 1973.  After retiring from the Army, he joined the Fairfax County Public Schools as their Director of Computer Operations and Coordinator, Computing Services until his second retirement in 2003.  Through the years, Mr. Jenkins has been active in various community activities including the Dale City Little League, the Boy Scouts of America and several veterans’ organizations. Mr. Jenkins began serving on the Board of County Supervisors in 1982 and is currently serving his eighth consecutive four-year term.  He is the longest serving Supervisor in the history of Prince William County.

More on awards given during the PMAH Taste of the Town event:

The winner of the 2017 Howard Horner Volunteer of the Year award was Mr. Tom Joseph, who was recognized for his outstanding work with PMAH since 2015.  Mr. Joseph has worked on numerous PMAH projects, taking the lead on many.  He especially likes to work with area youth and gives them the opportunity to learn about, and use, the tools of the trade.  According to Talbot Abshire, Project Manager for PMAH, “The clients have nothing but praise for Tom and his work.  His work always leaves clients in a much better situation than they had been before.”