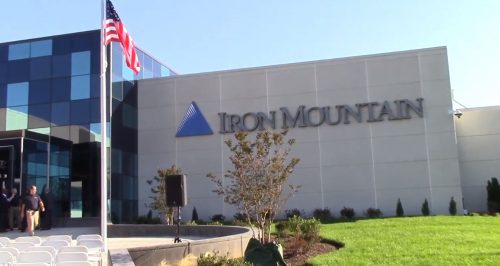 Employees, elected officials, and community leaders gathered at the 165,000 square-foot facility off of Wellington Road to celebrate the opening of the facility, which has thus far made an $80 million investment into the county.

According to a release, Iron Mountain is an international company that provides data storage and information management capabilities.

As part of the opening, Iron Mountain has hired 17 new employees, according to Vice President of Portfolio and Operations Dana Adams. The data center campus will be adding on three more buildings to the property, providing $350 million in additional investment into Prince William, according to a release.

“In many ways, this area in Northern Virginia has become a ‘home to the cloud’ because of all of the Internet companies and IT companies that have focused their operations here…this area is well positioned for growth in the data center sector,” said Rich Miller of Data Center Frontier.

Adams said that there were many reasons that Iron Mountain chose to open a facility here, pointing to their several other facilities across the country in Massachusetts, Colorado, Missouri, and Pennsylvania.

“Iron Mountain chose this location for our Northern Virginia data center campus after an extensive site search that canvassed several counties here. We decided to plant the Iron Mountain flag in Manassas for several reasons. First and foremost was the site itself – 83 acres of land, suitable for up to a million square feet of development,” said Adams.

The new site is the company’s largest investment in a green field brick-and-mortar facility.

“Over the past year it’s been very exciting to see this building taking shape as Iron Mountain’s single biggest investment in a green field data center, so far,” said Adams.

Governor Terry McAuliffe spoke about the importance of data centers to Virginia’s economy.

“70% of the world’s Internet traffic – 70% – goes through 25 miles from here through Ashburn, Virginia,” said McAuliffe.

More on the data center, from a release:

Iron Mountain invested over $80 million in the first phase of this data center, which opens as an Uptime Institute Tier III certified facility for design and construction. And, like other Iron Mountain data center facilities, this new data center is designed to serve organizations with exacting service delivery and comprehensive compliance requirements, and supports key standards such as ISO 27001, FISMA High, PCI-DSS Level 1, HIPAA, SOC 2 Type II and SOC 3. The new data center also opens with more than half of its first phase capacity pre-leased, including customers like Virtustream, a Dell Technologies business. Virtustream is the enterprise-class cloud company that is trusted by organizations worldwide to migrate and run their mission-critical applications in the cloud. The company selected Iron Mountain based on the security, comprehensive compliance support and scalability of the facility to serve its regulated customer base and support its growth projections.

With two additional phases to come in this first data center and plans to develop three other facilities on the campus, Iron Mountain’s total investment for the site is expected to be over $350 million. The 83-acre campus design ensures efficient long-term customer scalability for a total of 60 megawatts. Iron Mountain is participating in Virginia’s data center tax program which helps provide long-term visibility into operating costs and lower total costs to customers.