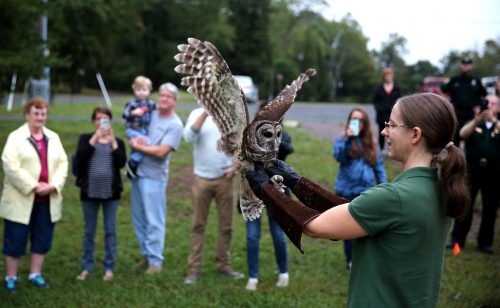 There’s one lucky owl flying around in Prince William, all thanks to area residents and the Raptor Conservancy of Virginia.

According to a release, the owl was hit in the area by a car this summer and after being rescue and rehabilitated, the bird was released back into the wild last weekend at the Silver Lake Regional Park in Haymarket.

Owls are often hit by vehicles as they dive for prey that is close to roadways, and they can also fly into the paths of moving cars, according to a release.

More on the story of the owl’s rescue, from a release:

One night in July, Bernadette McLaughlin was reading at her home, located in a neighborhood off Vint Hill Road, when she noticed an owl sitting on a low branch just outside of her screened-in patio. She also noticed that it was staying put longer than owls usually do. When it finally flew to a neighbor’s yard, McLaughlin noticed that one of its wings was drooping and that the bird had trouble gaining the altitude it needed to reach the branches. “It flew over there, and it kind of climbed up the tree dragging its wing. We all knew it was injured.”

McLaughlin said her neighbor, Gene Waddell, called the conservancy, who told them how to catch the bird. McLaughlin watched the bird for a day and worried as it sat in the same tree all day. At nightfall, the bird finally left its roost. “He dropped down to catch something, but then he would kind of hop over to the tree and then climb up the tree and then he would swoop down again.”

McLaughlin’s son, M.J., happened to be at her house for dinner that night while the owl was swooping down from the tree and then climbing it again. “He went out there with a blanket – he and my husband. When it dropped down one time, he just threw the blanket over it and picked it right up. It never fought at all,” she said.

Waddell was ready with her cat carrier. After the bird was put in the carrier, Waddell and McLaughlin took the bird to a nearby grocery store where they met Gabby Hrycyshyn with the Raptor Conservancy of Virginia.

Hrycyshyn, who said that the bird was still a chick because of the fuzz around its face, took the owl to the conservancy’s surgeon, who set the bone and put the owl on the way to recovery. The surgeon was pretty sure the owl’s wing was broken from being hit by a car. “That’s the only way we see a big break like he had,” Hrycyshyn said.

It takes about a month for a bird’s wing to heal and some more time for evaluation to see if the bird will be able to fly and hunt. This includes checking the owl’s eyes to make sure they were OK since birds of prey can’t be released if their eyesight isn’t perfect. “Owl eyes are really big, really delicate. It’s fairly common for them to get partially blinded after getting hit by cars.”

Hrycyshyn said the owl passed all of the tests before it was released into the park, which has fields and open forests that are perfect for owls.

McLaughlin and Waddell said they were happy to see the bird fly.

“We’ve been worried about him. We’ve been keeping in touch to make sure he was OK, and we made a donation to the organization,” Waddell said.

McLaughlin said she thought about the owl the first night after the release. “We all got kind of attached to this bird. It was great to see it fly off.”

This is the second bird the conservancy has released at Silver Lake Regional Park. The park, on Antioch Road near Haymarket, is a prime area to release birds of prey with an extensive wooded area, open fields and water.