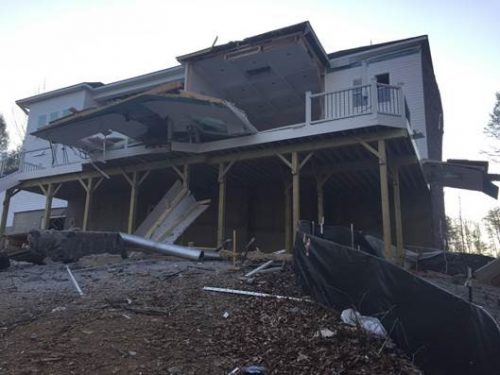 One injured in house explosion this morning in Manassas

A home under construction in Manassas exploded this morning.

According to a release, the Prince William County Department of Fire and Rescue were called out to a single-family home on the 11600 block of Kahns Road at 6:50 a.m.

“Upon arrival, fire and rescue crews discovered the home with minor fire damage but had sustained extensive structural damage due to a potential explosion, thereby limiting the crew full access to the home,” stated a release.

The home was under construction during the time of the explosion, and a construction worker on the site was injured. According to a release, the individual was flown to Washington Hospital center for treatment.

The home has extensive damage.

“The preliminary findings indicate the explosion occurred when the injured worker reported for work and activated the home’s propane furnace. The Fire Marshal’s Office has determined this is an isolated incident and presents no immediate danger to the community,” stated a release.

The Building Official has marked the home unsafe and the incident is currently under investigation.