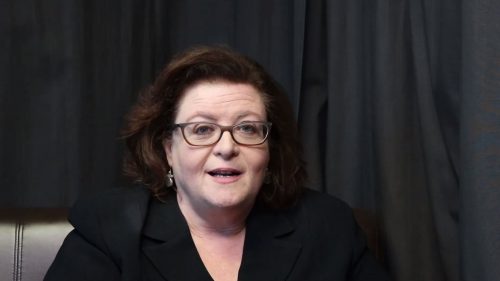 On July 1, Betty Dean will start her one-year term as the chair of the Prince William Chamber of Commerce.

She will replace Chairman Jim Elliott, who serves the market president for First Virginia Community Bank in Manassas.

Dean is president and CEO of Betty Dean & Associates, a consulting company.

What other ways are you involved with the community?

Well, I’m really delighted and honored to be the incoming chair of the Prince William Chamber of Commerce. That’s an organization that I’ve been associated with really since I moved here to Virginia in 2000, or shortly thereafter. So, the chamber’s a huge part of my life and so it’s super exciting to be able to [give] back in this way, and to be a part of the leadership for the chamber. The chamber is one of the ways that I’ve been able to be able to be engaged in the community over the years. I’m also very proud to be a member of the Lake Ridge Rotary, delighted to be a graduate of the inaugural class of Leadership Prince William — “Always First Class,” yay — and was involved — about 10 years ago now — the founding of an organization called “Occoquan River Communities,” which works with business, organizations, local governments in the regions up and down the sides of the Occoquan River to promote that area as a destination. I’m also the past president and the current vice president of the Coalition for Human Services, which is a wonderful organization where not-for-profit organizations and their counterparts in government agencies, as well as individuals, faith-based organizations, etcetera, work collaboratively to try to be as effective as they can in delivering human services to the community. So, what’s kind of fun for me is that in my 18 years now [of] living here in Prince William County I’ve had a chance to be engaged in the community sort of from all sides — working very much with the business community, deeply engaged in the not-for-profit community, and collaborating with public policy issues. So, it’s a good feeling to know you’re involved.

What do you hope to accomplish this year as chair of the Prince William Chamber of Commerce?

So, I think the Prince William Chamber of Commerce is really at an exciting time, sort of, in the life of the chamber. As most everybody knows, about eight years ago two different chambers that were operating within the Prince William County region joined together to become the Prince William Chamber of Commerce. And we have, sort of, now had those eight years to mature as an organization and we’re now … really jumping in with both feet into the future, into an even broader expansion and involvement in the business community. My vision, as I jump into my year of leadership is to do a couple things.

First of all … to build on the initiative that was started by my predecessor, Jim Elliott, to raise the public profile and the advocacy profile for the chamber. Jim has done a fabulous job of making sure that the chamber has become that voice of advocacy for the business community, working with public policy officials, elected officials, government, staff, etcetera, both the local and state and — even to some extent — on the federal level to make sure that Prince William County is an amazing place to do business. And if you’re going to be an amazing place to do business, that means more than business-friendly regulation — although that’s important. It also means making the community the kind of community that businesses want to be in, want to do business in in the first place. So, I’m hoping very much to build upon that initiative that Jim has already begun.

And a really important initiative — for me — is to put a renewed emphasis on something that we’ve always done at the chamber, and that is to emphasize that — as a chamber member — you can help yourself and your chamber by doing business with other members. That’s kind of a simple concept, but the idea is if you’re a chamber member and you need a roof put on or your automobile repaired, or you want to choose a not-for-profit to support.

Are there any other initiatives that you are working on?

Well, one thing that I’m really excited about — and we’ve already started on this, we started actually a couple of months ago — my chair-elect Lyle Dukes and I are co-chairing the committee that’s doing the new strategic plan for the chamber of commerce. I’m really excited about it, because we are really doing a deep dive into some really good research about what’s going on with other chambers and how they’re engaging their members, and what are some of the things that they’re doing to continue to help build successful business communities. And we’re also about to start a process of doing a lot of stakeholder meetings, where we’re going to bring in current members, people who are not yet members, people who may have been members previously and are not members now, and talk to all of them — not so much about what has been, but what the chamber can be, what do they want it to be. So, we’re looking forward, we’re taking our time, we’re going to do it — really — the right way. And we want to be able to put in place a plan that’s going to position the chamber to be successful in the future, as a new generation of leadership comes on board and as the chamber, sort of, moves into that next generation and does some — hopefully — transformational things. It’s going to be exciting.

How do you see the chamber evolving?

Chambers specifically — and membership organizations in general — are evolving in terms of how people think about being engaged with membership organizations, what expectations they have out of them. And — in the case of the Greater Prince William community — we’ve got the first majority minority population in Northern Virginia. We need to know what that means to us in terms of continuing to support and grow our business community and making sure that it thrives, making sure that everybody in business here has opportunity to be successful and to access the resources they need to be successful. The chamber can play a big role in that. The chamber can also play a role as an advocate in making sure that our business policies and — in fact — our community in general — education, public safety, transportation — all of those things that make communities great places to be, or not great places to be — are important just as much for me as a business owner as they are for me as a resident. So, the chamber has a big role to play in those areas, and I think that’s one of the things that we’re going to look at as we complete our strategic plan. And I’m pretty excited about where we’re going with it.