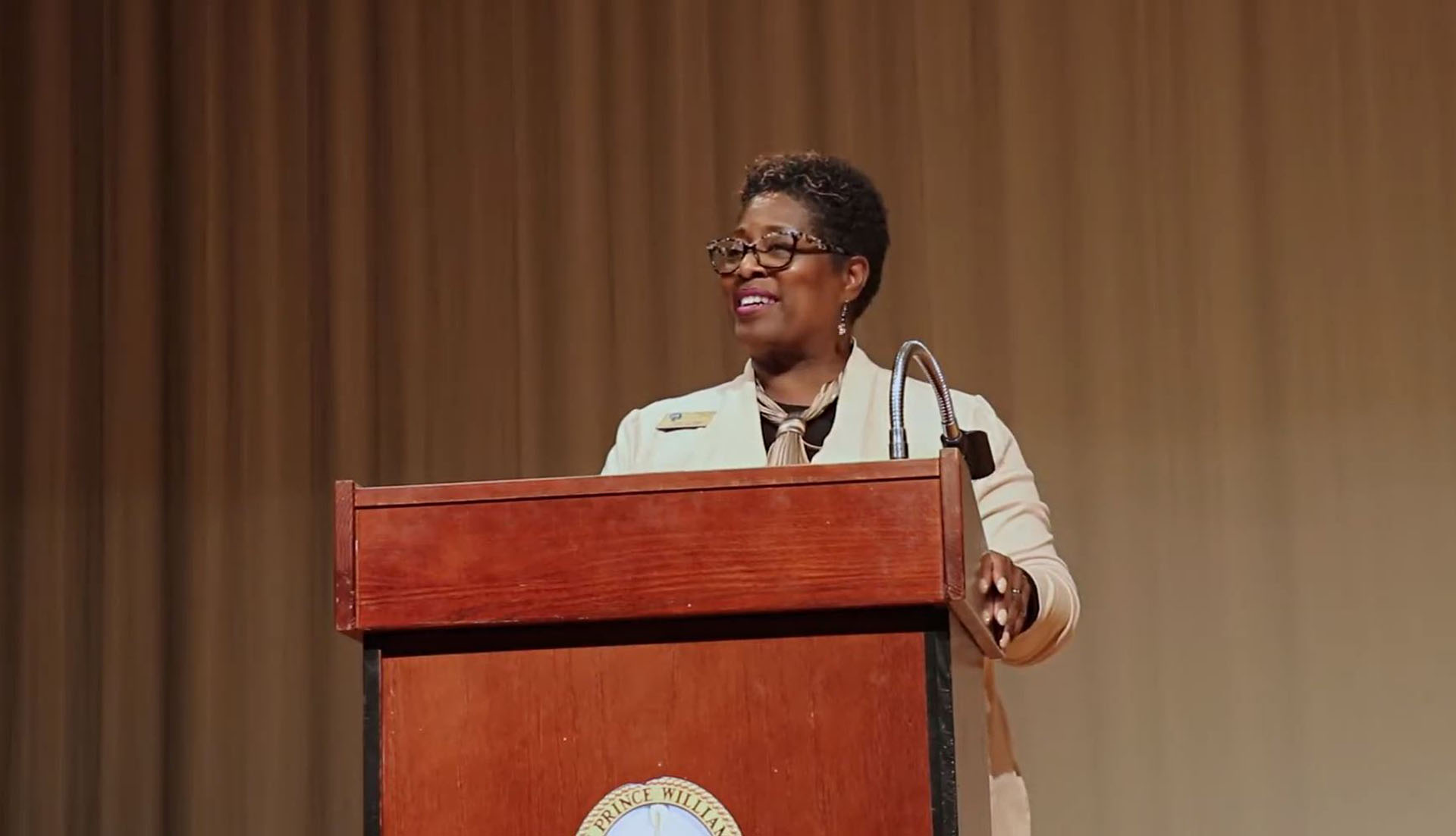 A newsletter has been created by The Potomac District Office.

Called The Bailey Bugle, the newsletter shares information and updates about the district.

The newsletter was among the topics Bailey talked about at her first In-Person Town Hall on Wednesday.

She hosted the meeting at the Ferlazzo Building in Woodbridge.

Attendees were able to answer questions and visit the supervisor’s office, which is located in the Ferlazzo Building, 15941 Donald Curtis Drive in Woodbridge.

“Our house is always open for you to come in and share a word, and talk with us, and give us insight on what’s needed in the community,” Bailey said.

Here is a transcription of the video, which was completed with 80 percent accuracy:

Bailey: This is an exciting time in our district and for all of my wonderful, um, leaders in the community for all of, uh, of you, I really appreciate the work that you’ve done already, but hold onto your hats. We have a lot more work to do. And so, um, I just want to share with you a couple of things. We’ve been very busy in the Potomac district. Uh, how many of you have seen the Bailey vehicle? You know what I Oh, okay. Probably hands up high. That’s an important thing. The Bailey bugle is our newsletter and it is distributed to you a daily. Actually we created that so that we can continue to have communication, um, not just daily, but let you know what’s going on in the, uh, in the district. Make sure that you are aware of updates in the district and we’re going to expand it and make sure that we’re covering all hos in the district.

Bailey: How about that? I think I have some HOA presidents here. If you are, raise your hand please. Very good. Thank you. Thank you mr O’Malley and Monet. Thank you so much. Really appreciate it. But the Bailey bugle is our newsletter. And we thought that that would be a great opportunity, um, at your leisure when you’re spending your Sunday evenings with a cup of tea or a glass of wine, you can read the Baileyville well how about that? So, so that’s real important, but I wanted to start to say that, um, things have been, I’m very pleased and are, we’re not even through the first quarter yet, but we’ve had a lot of interaction with County staff a lot. Her interaction with the community because we understand the Potomac is very, very invested in the community and engaging and understanding what’s going on. So we started out with our open house in January, had about 70 people here, which was phenomenal in our little small office around the corner.

Bailey: And before you leave, if you have time, do want to take you to the office. Chris, is that you? That is. Thank you. We want to take you around to the office so you’ll know where we’re located. And our house is always open for you to come in and share a word and talk with us and give us insight on what’s needed in the community. But at our open house was about 70 people coming in and just engaging with one another, getting to know one another. Because in Potomac, we live in a very diverse community. And when I say diverse, I mean from senior citizens to millennials to little people. We have a lot going on in the Potomac district. And so it’s real important that we get to know each other. We’ve had two virtual town halls and that’s been exciting for me. Um, and my office, I, I’m very grace with, I had to, I had to, but now I have one millennial working in my office and he’s teaching me a whole lot of tricks that I didn’t know that I could do.

Bailey: And one of them is doing a virtual town hall. So that gives us an opportunity with social media to engage that way for people that aren’t able to, to come into the office during the week, but they are able to pull up their cell phones and ask the questions that they may have during the week, but not an opportunity to say so. Um, we’ve had two of those and now the end house or the, um, the in-person town hall. So I’m really excited about that perspective. Just from a communication, stamping, vision, vision for the Potomac district. And let me say before I tell you what I think, because it’s not my vision. It’s our vision that marinate for a minute. It’s not my vision, it’s our vision. When my husband and I came through the Potomac district and 1976, yes, 1976, there wasn’t a lot here at all.

Bailey: And we came initially to, um, Quantico and I told my husband, and some of you will know the story that I’m about to say, don’t ever take me to dump fries, Virginia. Again, I was a young military wife, uh, inner city kid and I just, I was not accustomed to the things that I was seeing or the things that I didn’t see. And so we came back in 1989 and I saw this big round thing off of 95 Palmetto Patomic mills. So I said, okay, there’s hope for dumped fries. So then we retired in 98 and we were living in Fairfax and we had the opportunity of working in, um, in corporate America. Cozy and I were at a place called EDS, it’s now called perspective. Um, when we were there and I worked for Xerox as well, and he was ending his career in the military and we lived at Fairfax and we love Fairfax.

Bailey: It was very diverse. Things were happening, buildings were going up. It was just a plethora of things happening in Fairfax. We, we were very much politically engaged there as well. And one morning we were coming to church down a two lane road called one 23, and he said, going to church at this church called first Mount Zion. Some of you might know that little guy that’s the appropriations chair is the pastor there. And he said, we’re going to move to Prince William County. I said, we’re going to move where he said to Prince William County. I said, you gotta be kidding me. It’s no, go find a house. Go West Gainesville Risto Haymarket and find a house and we’re moving to Prince William County. I said, okay. So I went shopping for a house and I found our home that we live in now on route two 2234 not too far from 95. The subdivision called Brittany, is that West as far East as you can get. And now I live in Dumfries, Virginia. That was a joke.

Bailey: We have a new trail way in front of our house leading from 95 almost to 95 all the way down, uh, to the West end. So I see people from Ashwin walking the trails and riding their bikes. Um, we have an opportunity to have more recreation in our community. And so I think that’s an opportunity for new families that are moving here in Montclair and or in the area to have more recreation in terms of basketball, in terms of multipurpose building, those kinds of things. But also with our seniors group, you guys are busy all of the time and you’re, you have energy plus. And so when you are tired of working in the in the district, then you want to go out and have a nice dinner. You want to go to a movie. So those kinds of things I can see coming in the Potomac district, but I can’t make that decision.

Bailey: I need for you to make that decision for me. There’s a wonderful place on the North Eastern corridor of our district called Potomac shores, Patomic shores. I just want to think is the pinnacle for the Potomac district in terms of what the future looks for subdivisions and so there’s opportunity for us to build a town center there, a town center that everyone can go to and enjoy, but before we make those kinds of
decisions, we do have to talk about the roads. We do have to talk about transportation. We do have to talk about education for our children. The oldest high school in our district is the Potomac high school. We have an opportunity to build a new high school in our district. That’s important. That’s planning for the future. And so I need your help. I need your assistance. I need your ideas. About what you want the Potomac district to look like. Now it’s going to take a little compromise in some areas. It’s going to take a lot of discussions. It’s going to take, sometimes that’s not agreeing. I don’t mean me, but it’s good. Yeah. We’re not going to agree on everything, but I know that I, I chose this district where my husband told me to go West and I came East. I chose this district because of its history because, because of its vibrancy, because of the people that care about the district. I chose this district because I see the future in this district.