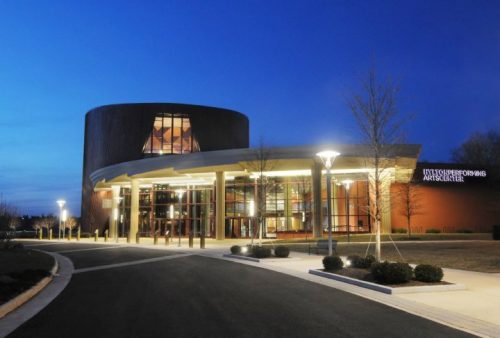 The Hylton Performing Arts Center has announced their 2017-2017 performance lineup.

More on the season’s entertainment, from a release:

“This new season is thrilling on multiple levels,” said Rick Davis, the Hylton Center’s Executive Director and Dean of George Mason University’s College of Visual and Performing Arts. “From some of the world’s finest classical musicians, both orchestral and vocal, to thundering jazz, energetic dance, and the exuberance of rock ‘n’ roll, there are so many ways for audiences of all ages and affinities to connect with the beautiful celebration of our common humanity that the performing arts offer.”

The upcoming season’s Hylton Presents programs highlight a number of artists who will be making their Merchant Hall debut. Some of these new performers include:Under the Streetlamp, a modern Rat Pack who will offer an energetic concert of classic rock ‘n’ roll hits; The Martial Artist and Acrobats of Tianjin from China, with their impressive showcase of stunts and tricks; the acclaimed all-female a cappella quintet Nobuntu direct from Zimbabwe; the leading Celtic dance company Dublin Irish Dance in a performance that incorporates music, dance, and storytelling; one of Sweden’s oldest orchestras, the Helsingborg Symphony Orchestra, performing an all-Beethoven program; and the internationally famed theater troupe Mummenschanz, presenting their singular form of visually stunning and playful storytelling.

The series will also feature returning audience favorites such as: D.C.’s Metropolitan Jazz Orchestra, under the direction of Jim Carroll and joined by singer and trumpeter Bria Skonberg; the American Festival Pops Orchestra and esteemed conductor Anthony Maiello, offering their annual Holiday Pops and Valentine Pops concerts; the celebrated music and dance ensemble Tango Buenos Aires direct from Argentina; and new productions by Philadelphia’s Walnut Street Theatre and Moscow Festival Ballet. The festive season at the Hylton Center will also see the return of: renowned male chorus Chanticleer; the Grammy-nominated bluegrass and country group Dailey & Vincent, whose most recent appearance at the venue was filmed for a 2014 PBS special; and prolific pianist Jeffrey Siegel, who will offer two programs of his ever popular Keyboard Conversations® performances.

Hylton Family Series continues in 2017-2018 with an array of storybook classics that have been reimagined for the stage by leading children’s performers from across the country. These family-friendly performances include: The Velveteen Rabbit, Reborn by the Pushcart Players; My Father’s Dragon by Philadelphia’s Enchantment Theatre Company; and Goodnight, Goodnight, Construction Site by Bay Area Children’s Theatre. Children and families can also experience the science and secrets behind movie magic in The Hollywood Special Effects Show.

In its fourth installment, Matinee Idylls series will present four programs spotlighting high-level talent from the D.C.-area and Virginia. This 2017-2018 season will feature: Northern Virginia’s premier period-instrument ensemble Mannheim Rocket Orchestra; the sound of NPR’s All Things Considered, The Washington Saxophone Quartet; renowned singers Jennifer Decker, Kelly Glyptis, and Angela Knight in Soprano Soiree; and A Taste of Opera, an intimate recital by artists from Virginia Opera. The format for these events includes lunch by a local restaurant, a one-hour concert, and a coffee and dessert reception with the artists.

A full listing of Hylton Presents, Hylton Family Series, and Matinee Idylls performances is attached. Unless otherwise noted, performances will take place in Merchant Hall at the Hylton Performing Arts Center located at 10960 George Mason Circle, Manassas, Virginia. Season subscriptions are currently on sale to Friends of the Hylton Center at hyltoncenter.org/preview or by phone at 703-993-7700.