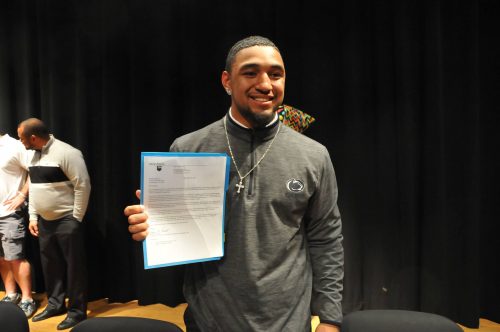 We’ve spoken about the Hylton High School senior quite a bit over the past year, as he was selected to play in the 2018 Under Armour All-American game, and was named the Gatorade Virginia Football Player of the Year.

Now Slade has hit a new milestone, signing and committing to a university and college football program for next year.

Surrounded by loved ones, Slade signed paperwork committing himself to Penn State University in Pennsylvania.

Slade was scouted by several scouts prior to choosing Penn State.

“It was always Penn State. They have it all – academics, football, and it just felt like home,” stated Slade in a release.