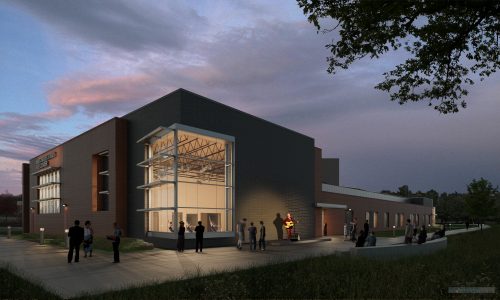 According to a release, the $8.5 million project will add a 14,000 square foot addition to the center on George Mason University’s Science and Technology Campus.

The addition will add 10 rooms next to the Gregory Family Theater in the building, and “will be used by regional arts organizations, Mason students, Prince William County and city of Manassas schools, and the business community,” stated a release.

In the addition there will be six practice and teaching rooms, and two classroom and ensemble rooms with two rehearsal spaces, according to a release.

“This campus is where STEM becomes STEAM—Science, Technology, Engineering, Arts and Mathematics. Discoveries of all kinds are being made here, and with this new wing, even more musicians, actors and dancers will have the opportunity to develop their skills and pursue their artistic passions,” said George Mason University President Angel Cabrera.

According to a release, the project was partly funded by $6 million from the Commonwealth of Virginia, as well as a $2.5 million gift from the Cecil and Irene Hylton Foundation, along with several other private donations.

“This much-needed new space will allow creativity and collaboration to flourish at the Hylton Center. Our community has spoken. This beautiful wing will be filled with teaching, learning and rehearsals on the day it opens,” said Dean of Mason’s College of Visual and Performing Arts Rick Davis.