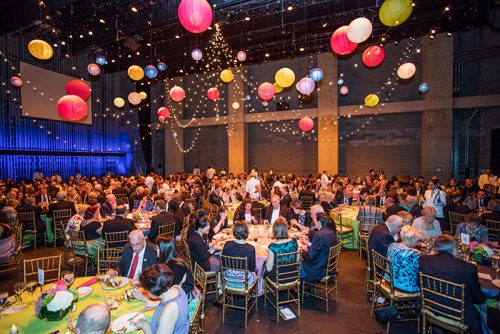 Last weekend the Hylton Performing Arts Center in Manassas celebrated their 6th anniversary in style at a gala that raised $124,000 for the arts.

More on the gala, from a release:

The 6th Anniversary Gala honored Northern Virginia Electric Cooperative NOVEC and Sally Lay. NOVEC is a founding champion of the Hylton Center and has continuously supported and sponsored many programs at the Hylton Center, including their current Series Sponsorship of the Matinee Idylls Series.

Both honorees received an award of appreciation for their service to the Prince William County, the City of Manassas communities and to the Hylton Performing Arts Center. Delegate Rich Anderson presented each with a resolution certificate from the Virginia House of Delegates, and Congressman Gerry Connolly presented each with a certificate and entered them into the U.S. Congressional Record.

Co-chaired by Alison and Michael Dixon, and Dr. Christopher and Caroline Leet, the gala’s theme emphasized “Celebrating Community.” It began with a formal reception in the Didlake Grand Foyer featuring music by the Manassas Symphony Orchestra’s cello quartet. The Manassas Symphony Orchestra is one of the Hylton Performing Arts Center’s Resident Arts Partners, and throughout the evening, each of the Resident Arts Partners showcased their organization and upcoming performances.

Following the reception, dinner and the tribute to the honorees was held on the Merchant Hall stage. The Youth Orchestras of Prince William quartet serenaded guests as they entered the Hall and throughout dinner, and Manassas Ballet Theatre presented a video preview of one of their upcoming performances. Rick Davis, executive director of the Hylton Performing Arts Center and dean of George Mason University’s College of Visual and Performing Arts led the evening program, and George Mason University President Dr. Ángel Cabrera gave a special address.

The evening concluded with an after party and dessert reception in Didlake Grand Foyer with a special performance from Manassas Chorale’s ensemble, and a jazz cabaret in the Gregory Family Theater featuring The Darden Purcell Quartet. During the cabaret, Prince William Little Theatre showcased two pieces from one of their upcoming performances, with accompaniment provided by Martin Gallegos.