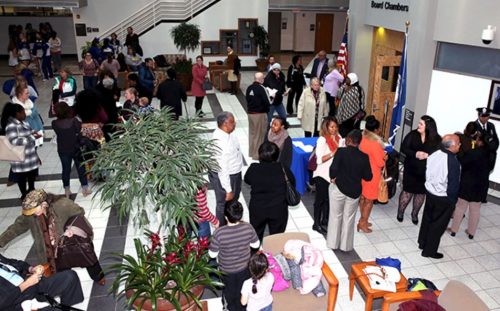 A few of Prince William’s human rights advocates are receiving a big “thank you” from the Prince William Human Rights Commission.

Several county residents, a couple of agencies, and a business have received the 2017 Human Rights Award, according to a release.

The awardees were recognized at the annual Universal Human Rights Day Celebration, which is hosted by the Human Rights Commission.

“We all on the board join you in our support of the human rights effort in the county,” Jenkins stated. “These people that we honor today are people that have been nominated … throughout the entire county and their qualifications have been recognized.”

Here is more information about the 2017 Human Rights Award recipients, according to a release:

Iyana Cones — Worked to bring the Sparkle Effects program to Osbourn Park High School, which is only the second school in the state to add the program that brings together school-based cheerleading and dance teams of students with and without disabilities.

Prince William Police Maj. Jarad Phelps — Started the Stay True to Blue police academy course for police cadets to give them real-life exposure to community issues and gives examples of how the police and the community can work together.

Todos Market— Which offered its parking lot as a venue for a multi-cultural festival. The Equal Employment Opportunity Commission, the Human Rights Office and Todos worked together to organize and stage the celebration. Todos was recognized for its willingness to serve the community without hesitation.

The Prince William County Office of Elections and the Electoral Board — Which pushed for early voting through a campaign to inform the public of the acceptable reasons people could vote absentee. Their efforts were successful and lines were shorter during the last election.