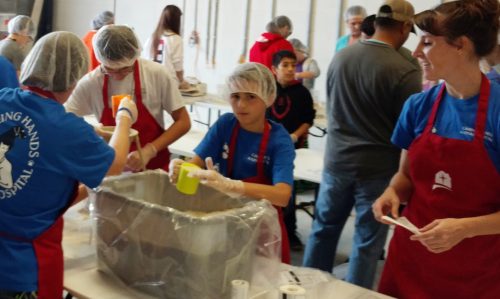 That’s the total amount of meals that the House of Mercy was able to pack during their Campaign to End Hunger event on October 1.

According to a release, 227 volunteers took part in the sixth annual meal-packing event, which was done to help feed poor and malnourished people in the community. This year’s meals were delivered to the St. Lucy Project of the Diocese of Arlington and the Capital Area Food Bank, stated a release.

The original goal for the event was to pack 40,000 meals, and it is clear that they far exceeded that initial goal.

“As anticipated, this event celebrated the huge potential of people who work together to make a significant contribution to the poor in the northern half of the Commonwealth,” stated House of Mercy Assistant Director Felice Hilton in a release.

Volunteers offered up their time and a $20 donation, which covered the cost of the supplies needed to pack and send the 71,928 meals, according to a release.

“Eighty six cents of each donation dollar House of Mercy receives goes back into our programs to support and serve the poor,” stated Hilton in a release.

The House of Mercy’s next big event will be their “Christmas with Mercy” event on December 10, where gifts can be donated for those in need.