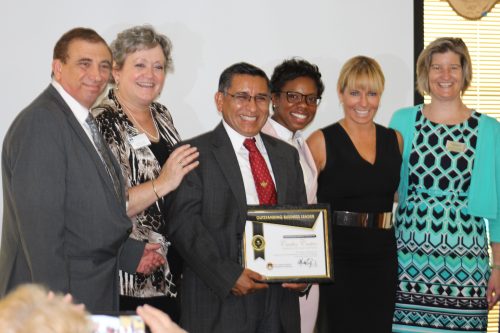 Business leaders from across the region gathered in Manassas to honor members of the Hispanic business community.

Todos Supermarkets President & CEO Carlos Castro was the honoree for the Virginia Hispanic Chamber of Commerce.

More on Castro, from a release:

Carlos Castro’s story as an entrepreneur and community leader has been covered by everyone from USA Today, to The Washington Post to NPR. But it is his connection with and commitment to the youth in his community that makes his vision so remarkable. A successful businessman who emigrated to the U.S. from El Salvador in 1980, Carlos has been a passionate advocate for immigrants ever since, serving as a critical bridge between the Hispanic community and greater Prince William County. “When he speaks,” someone once noted, “both sides listen… he is always respected.”

When Carlos sees an opportunity to empower children and young adults, he makes things happen. He employs students on probation, mentors boys at risk of gang participation, and provides his grocery store employees with opportunities to improve themselves, and to learn how they can take action to help others.

Carlos is currently serving or has served as a board member of the Prince William Chamber of Commerce, Youth for Tomorrow, Potomac Health Foundation, Hylton Performing Arts Center, Northern Virginia Community College Education Foundation, Hispanic Organization for Leadership and Action (HOLA) and Northern Virginia Workforce Development Board among others.

DeSeguros employee Diana Paguaga was the honoree for the Prince William Chamber of Commerce.

More on Paguaga from a release:

Born and raised in Nicaragua, Diana Paguaga came to the United States in 1987 as a Fulbright Scholar in American University’s Development Banking Program. With MBA in hand, she returned home but soon returned to Northern Virginia since the political situation in Nicaragua, at that time, was becoming more and more unsafe for her family.

Looking for affordable housing and good schools for her children, Diana, with the help of a realtor, found a home in Virginia to raise her family; at the same time finding a calling. For more than a decade, Diana has been a realtor who has aided more than 100 Hispanic families achieve the American Dream of first-time home ownership.

Diana moved from selling homes to selling security as an independent insurance agent, especially Medicare supplemental insurance. In fact, her business is often referred to as the “Medicare Ministry,” since she gained the reputation of treating her clients with the concern and care as if they were her own family.

Through her “ministry,” Diana soon discovered that many of her clients from Central America–along with women from Afghanistan who escaped with their children–could not speak English. They desperately wanted to learn the language so they could communicate with teachers, neighbors, and adapt to the day-to-day challenges of living in a different country & culture. To help, Diana learned about BEACON for Adult Literacy where she now serves on the Board, and made the needed connection for her clients.

Diana has served for the last 4 years as the Chair of the Hispanic Council for the Prince William Chamber of Commerce. She is also the Hispanic Liaison at the Northern Virginia Veterans Association; the Vice Chair of the Salvation Army Advisory Committee; and an active member of the local branch of Zonta International, which aims to improve the status of women globally and locally through service and advocacy.

In August of 2016, Diana was appointed to the Commonwealth Council on Aging by Governor Terry McAuliffe. Appointees will join McAuliffe’s Administration to focus on finding common ground with members of both parties on issues to build a new Virginia economy and create more jobs across the Commonwealth.

More on Bello from a release:

Aldo Bello is a business entrepreneur and Chief Creative Officer of Mind & Media, Inc. which is a strategic media communications company located in Alexandria. MindandMedia.com was recently recognized as the Mid-Atlantic Entrepreneur of the Year. Aldo is also a founding member of the Latino Excellence Council, co-founder of Bright Box– an entertainment venue located in Winchester, Virginia, and co-founder of Ideas America- – a bilingual and bicultural digital video publisher. In addition to being a television producer, serial entrepreneur and businessman, he is also a beekeeper and wine enthusiast!

Aldo was born in Ames, Iowa, and is a first-generation immigrant from Santiago, Chile. As an award-winning producer, he works with federal agencies, non-profits, and broadcast entities to create programming that produces positive change in individuals and the communities in which they live.

As the Director/Producer of the documentary: “DREAM: An American Story,” Aldo won two regional Emmy’s and was awarded “Best in Festival” by the Greater Washington Immigration Film Festival in 2015.

Recently, Aldo was a member of the Stanford Latino Entrepreneur Leaders Program – a national program that helps business owners by providing access to networks, mentorship and capital to grow, create jobs, and build a stronger economy.

Aldo’s business affiliations include both the Alexandria Chamber and the Mid- Atlantic Chamber of Commerce. He serves on the Board of Directors of the Skyline Indie Film Fest and the Immigration Film Fest and is a member of the National Association of Latino Independent Producers and the Leadership Council of the University of Maryland’s Center for Global Migration Studies.

“We believe it is extremely important to recognize the many contributions that Hispanic businesses make to their communities. We take pride in honoring those businesses and their achievements, and are pleased to be able to share in this significant event alongside the Prince William Chamber of Commerce and the Mid-Atlantic Chamber of Commerce. Hispanic Heritage Month will culminate with the state-wide VAHCC conference and gala on October 13,” stated Virginia Hispanic Chamber of Commerce Founder & CEO Michel Zajur in a release.