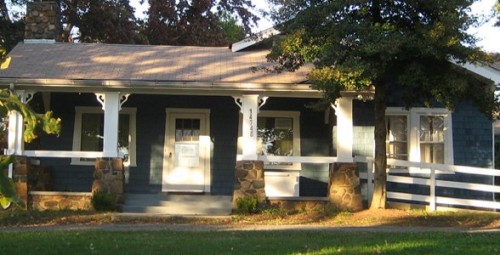 Where will the Haymarket food pantry go?

The Haymarket Regional Food Pantry is expanding – into a bigger space.

“When we moved into the space, we were serving maybe 70 families, and now we’re servicing over 500,” said the food pantry’s Executive Director Eileen Smith.

The food pantry, which has been around for 10 years, is currently located at 14740 Washington Street in Haymarket, and is a small historic home that the organization rents from the Town of Haymarket.

Small enough in fact, that in some cases they’re over capacity for food donations.

“For things like Thanksgiving and Christmas, a lot of people give us a lot of donations, and we were really really busting at the seams at the end of the year. Certainly we’re depleting that inventory very quickly…the community, thankfully now is aware of us, and remembers us in a good way,”

Part of the reason that the food pantry is moving into a larger space – aside from growing need – is that the town has decided to turn the lot the home is sitting on into a park and recreation area.

“The town [of Haymarket] has decided to put a park on the space where the house is, that we rent from them,” said Smith.

According to Smith, this impending move has pushed the organization to reflect on what services they offer, how they offer them, and what options they have for a new space. Currently they provide food three nights a week; Tuesday and Thursday night and Saturday mornings, said Smith.

“It’s a good time to take a step back and think about who we are, and what services should we offer to our customers, what do they need from us,” said Smith.

One new idea that they’re entertaining, according to Smith, is shifting to a self-service grocery store model, which has been gaining popularity in food pantries across the country.

“In the space we’re in right now, we certainly wouldn’t ever have the space to do anything like that,” Smith said.

A relocation committee has formed to look at the direction of the organization and where they will relocate. The food pantry has until the end of the year to move, according to Smith.