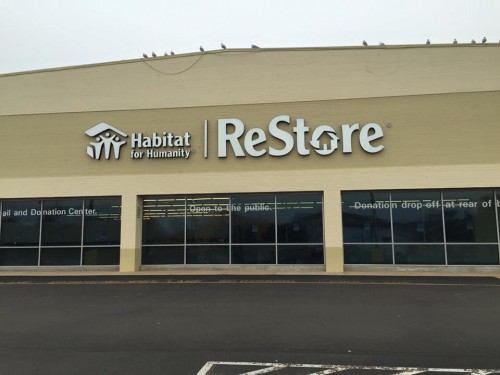 Habitat for Humanity ReStore opening a huge hit in Manassas

The Habitat for Humanity ReStore grand opening was a big hit this weekend.

The store, originally located on Center Street in Manassas, relocated to a larger facility at 10159 Hastings Drive in Manassas near the Prince William Fairgrounds after 11 years in the original location.

While the original grand opening date was scheduled for January 23, it had to be pushed back to January 30 due to the blizzard that swept the area that weekend.

The ReStore sells furniture and home improvement items that are donated by individuals and companies, and uses the proceeds for Habitat for Humanity’s home building projects.

Customers lined up around the building to make their purchases following the store’s ribbon cutting, and enjoyed live entertainment – even a moon bounce.

“The sales were phenomenal, the support was incredible, and we were just thrilled because it was really busy,” said Traci DeGroat, President and CEO of Habitat for Humanity Prince William County.

According to DeGroat, the store made 601 sales on Saturday – which is a big deal.

“That translates to about 75 [sales] an hour…and if you look at what we usually do, it’s about 75 sales a day – so that’s really phenomenal,” said DeGroat.

DeGroat was overjoyed that people were able to not only find things to use in their homes, but to also think of things that they could donate to the ReStore.

“Between the entertainment…and the moon bounce, and just being able to see all of the merchandise that donors have provided. And you know, people being able to get good deals and getting ideas of what they could donate,” said DeGroat.

In order to handle the rush of customers for the grand opening, more than 30 volunteers came out to assist the organization.

“Another thing that I think was exciting was the number of people who volunteered. We had about 50 people working there [at the opening] and at least 30 of them were volunteers. And I think one of the things I came away with…is that we’re going to need a lot more volunteers working in the store here, than we have in the past,” said DeGroat.

To learn more about Habitat for Humanity’s projects in Prince William, check out their website.